YARA is a tool that can be used to identify files that meet certain conditions. It is mainly in use by security researchers to classify malware.

YARA rules are a way of identifying malware (or other files) by creating rules that look for certain characteristics. YARA was originally developed by Victor Alvarez of Virustotal and is mainly used in malware research and detection. It was developed with the idea to describe patterns that identify particular strains or entire families of malware. 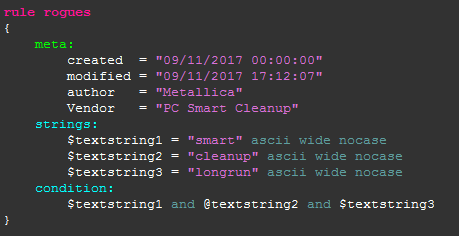 Rules are composed of several sections. The condition section is the only one that is required. This section specifies when the rule result is true for the object (file) that is under investigation. It contains a Boolean expression that determines the result. Conditions are by design Boolean expressions and can contain all the usual logical and relational operators. You can also include another rule as part of your conditions.

To give the condition section a meaning you will also need a strings section. The strings sections is where you can define the strings that will be looked for in the file. Let’s look at an easy example.

The rule shown above is named vendor and looks for the strings “Vendor name” and “Alias name”. If either of those strings is found, then the result of the rule is true.

There are several types of strings you can look for:

There are many more advanced conditions you can use, but they are outside the scope of this post. If you would like to know more you can find it in the YARA documentation.

Metadata can be added to help identify the files that were picked up by a certain rule. The metadata identifiers are always followed by an equal sign and the set value. The assigned values can be strings, integers, or a Boolean value. Note that identifier/value pairs defined in the metadata section can’t be used in the condition section, their only purpose is to store additional information about the rule.

YARA is a tool that can be used to identify files that meet certain conditions. It is mainly in use by security researchers to classify malware.

Screenshots were made using Yara Editor by Adlice Software