In a scene straight out of a movie, a Florida prison suffered what they are presently calling a “computer glitch.”

In a scene straight out of a movie, a Florida prison suffered what they are presently calling a “computer glitch.”

This "glitch" has caused all the electronically secured doors of a maximum security wing to open, allowing inmates to roam the corridors, with all the ensuing mayhem. In a recently released security video of the incident, one of the inmates can be seen jumping over a rail to avoid an attack from rival gang member. 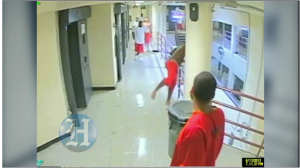 You can read about it here in complete detail here courtesy of Wired. This is apparently not the first time this has occurred, raising the possibility that the first occurrence was a trial run to test the reaction of the guards.

I am reminded of Watch Dogs, an upcoming Ubisoft video game, where this type of scenario is central to the game.

If this was indeed a hack, we are seeing real life, being stranger than fiction.

The systems that control the locking mechanisms of this high security prison wing are, when you boil it down, computers. They're highly specialized and isolated systems, but computers can be subverted.

We have seen so called "air gapped" computer systems be compromised in the past. While the attacking inmate may have simply had a quick realization of the situation, and acted upon it immediately, we can't rule out the possibility that the "glitch" that caused the doors to open was actually intentional, and part of an elaborate plan.

If that is the case, this is certainly a frightening revelation.