Minecraft, Modding and You

We offer some advice for those with Minecraft fans at the younger end of the family spectrum.

Have your children lost entire jam sandwiches down the back of the sofa? Is your cat sick of water pistols? Do they download all the things?

We can't do much about the first two, but that last one is most definitely something we can assist you with.

Minecraft is absolutely huge where children are concerned, and for many its their first introduction into the world of gaming mods. Its open world, go-anywhere-do-anything setup is ideal where adding homespun additional content is concerned, and as a result mods are always popular (take a look at the Google Play store for the mobile version of Minecraft - there's mods all over the place).

Of course, not all mods are made equal - and depending on where the mods are obtained, your children could be opening themselves up to potential harm. Even experienced tech-literate people can have a narrow escape, and it really pays to explain the perils of modding to anyone in your family with a thing for Minecraft. The rise of child-friendly tablets only makes it even more crucial that we take part in a spot of education for the young ones in your life. Here are some pointers:

1) Games aimed at children have always been hot targets for scammers, and anything with a digital economy tied to it just makes things even more appealing. Neopets has to have been one of the first along these lines, and sure enough scammers were taking advantage of the fact that magical paintbrushes were difficult items to obtain. Hey kid, want to get your hands on a free paintbrush?

Hey! I saw that you were looking for a paintbrush. I think it's silly to pay like 10k Neopoints when you can just create whatever paintbrush you want with this program. It's so easy. Just click the one you want and boom, there you have it. These supposed paintbrushes were actually pieces of Malware hosted on third party websites, and in many cases dumped victims into Botnets. Some of the scammers were particularly interested in whether or not the kids had parents who did online banking on the target PC, so as you can see the children are more of a stepping stone to the adult's financial details. This tends to be the case in most of the child related scams I've personally seen down the years - if they could manage to sell the child's account on, or steal unrelated credentials (Xbox Live, for example) in order to further spread their spam links then great - but that's only the side dish to the main course.

2) It's maybe unrealistic to think very young children will be jumping on the password manager bandwagon anytime soon, but given that they'll probably want to use the same simple password for everything, at least consider giving them an insight into the world of passwords and take ownership of their logins. Quite often, scam modding sites will ask for login credentials for the game in question so sensible password handling is a valuable skill to impart. The alternative is for you to micromanage their six thousand game passwords by hand and log them in across multiple titles every ten seconds, at which point the tablet is probably more at risk from you "accidentally" throwing it over the fence than from a sophisticated hacking crew based in Eastern Europe.

Once they understand why multiple (different) passwords are a good idea, you can then explain to them why the password book their well meaning school teacher probably issued them is bad, which I'm sure will be a fun-filled discussion not at all filled with screams of "MY BOOK, NOOOOOOOOO".

3) Even mobile games have online chatrooms in them nowadays, which I'm sure will come as a surprise to some parents. As the BBC article suggests, you should ensure your children don't reveal personal information about themselves, use gender neutral names and avoid clicking on links sent their way by strangers (this is even more important if they're being sent links or images via private message). Chat is a major concern because scammers often tout their "totally real, honest" game mods via chat and / or DM.

Of course, the best solution here is for them to avoid chat completely, but in many cases chatrooms aren't off in some separate zone away from the main game - they're often bolted on to the lower portion of the screen with messages popping up directly under the game itself. You can always look for an option to disable it, but I suspect this might be an uphill struggle. A bit of advice and safety suggestions galore would be a better move here.

4) Many gaming themed websites make their money from adverts and downloads, and although Google are taking the fight to dubious download buttons you may wish to explain the benefits of not clicking on everything in sight. If you've ever wandered onto a site and raised an eyebrow at the amount of ads everywhere, consider that some of them could lead to survey scams, downloads or ring tone subscriptions - a lot to deal with for a small child wondering what on earth is going on.

As with chat rooms jammed into the games they play, though, you can't always strip adverts out of a child's gaming experience. Even if they quickly learn to recognise and avoid clicking pop up adverts in a title they play, they may still wander into problems as some developers now incorporate adverts into the actual decision making process of the game itself. When Advergaming becomes a game mechanic, what will that six year old holding the tablet actually do? 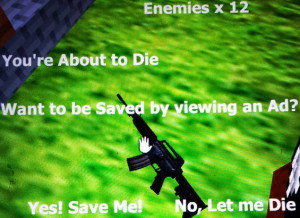 5) This isn't specifically related to mods, but as it's touched on in the BBC article it's worth mentioning. Privacy settings are important, and most of the major gaming platforms come with a comprehensive selection of privacy / child safe settings, from the Kindle Fire Kids Edition to Xbox - there's something for everybody. You may find that privacy settings inside mobile titles aren't quite as comprehensive as those on a dedicated gaming system, so a little extra care and attention may be required.

We haven't covered all the bases, but then there's quite a lot of them where kids, modding, and popular games are concerned. Whether we're talking about Minecraft or another game entirely, unofficial add-ons can extend the life of a title - but you absolutely have to take care that your child doesn't just grab ten different downloads from five unrelated websites and starts hammering the install button. As with all things, it only takes one click - at a time when many adults fall for relatively simple confidence tricks, it's up to you to ensure the safety of your children online.