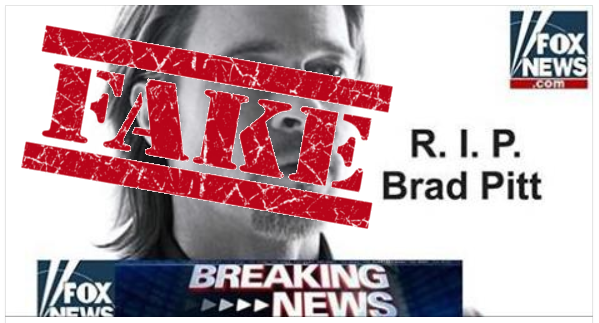 Brad Pitt subject of new hoax after split with Jolie

Facebook has once again become the inadvertent launchpad of another celebrity death hoax campaign, luring fans of celebrity couple Brad Pitt and Angelina Jolie within the network to click potentially harmful links not a day long after the news of their divorce has hit mainstream media.

News of famed actor, Brad Pitt, purportedly taking his own life has been making rounds within Facebook immediately after TMZ revealed that his wife, Angelina Jolie, filed for divorce. This is the most recent celebrity death hoax to hit social media.

Snopes, a trusted source when it comes to hoaxes, confirmed that this bogus news has been around since the 21st of September.

Looking at recent public Facebook posts today, we have seen that the sharing of the said hoax post has begun dying down early this week. Thankfully.

Snopes found a sample Facebook post showing the fake news came from a known news outfit and claiming that Pitt died in a shooting range suicide. This sample, which we have displayed below for reference, also bore the headline “FOX BREAKING NEWS: BRAD PITT Found dead (SUICIDE)” with the accompanying descriptive text, “A purported FOX NEWS Video showed that the Hollywood actor hanged himself”. 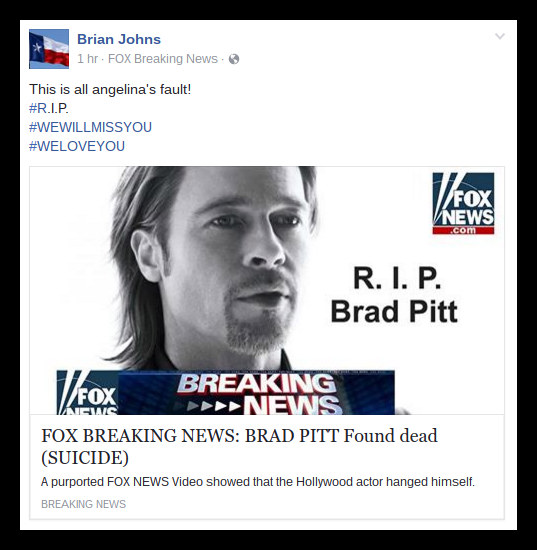 Users who clicked this news were directed to a Facebook app page requesting permission to access their profiles. Snopes further claimed that this app steals user credentials. Then, users were redirected to the fake news page containing the following paragraph:

Brad Pitt, 52, a multiawarded American actor and husband of Angelina Jolie, 41, shot himself in the head at a shooting range on Sunday. He was under significant stress because the couple ‘were going through a divorce and he had a history of depression’, sources have said.

One variant of this hoax found stated that Pitt purportedly died of “substance overdose”. 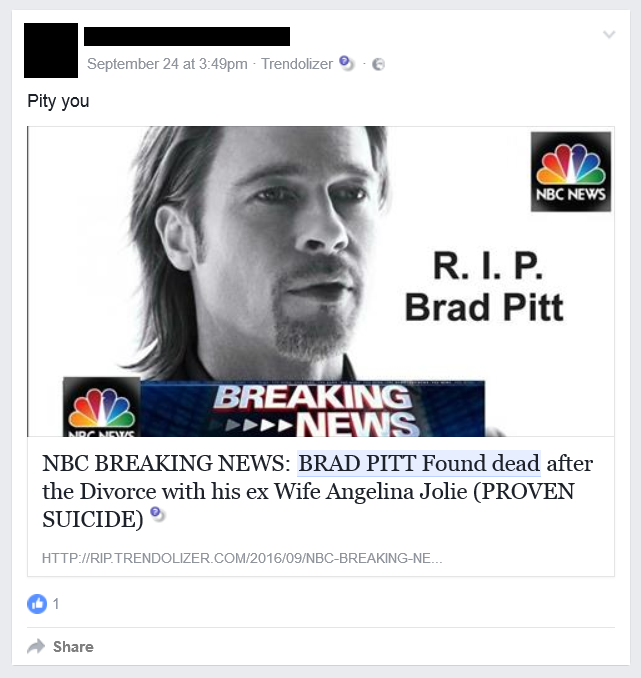 Facebook users who may have clicked links to any or all of these bogus reports are advised to change their passwords. For those who inadvertently shared to their network, delete the said post and warn your network about the hoax.