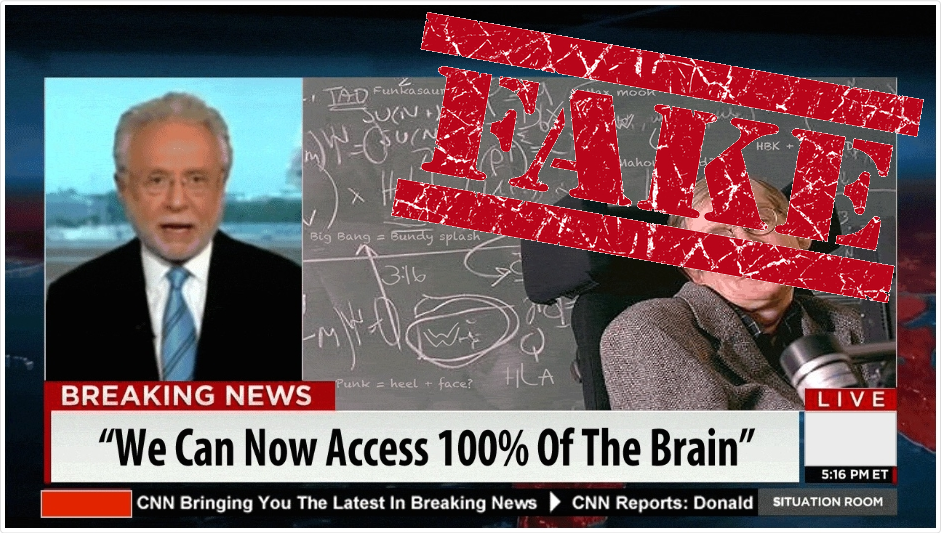 Scams of this nature doesn’t only arrive via email. They may also be shared via social networking platforms, chat sessions, public comments on forums and blog posts, and (if legitimate websites aren’t careful) sometimes they’re inadvertently shared via ads on sites, especially if user browsing is done via mobile devices.

First, we had fake online Canadian pharmacies, and then fake diet supplements. Now, we have fake brain enhancers. 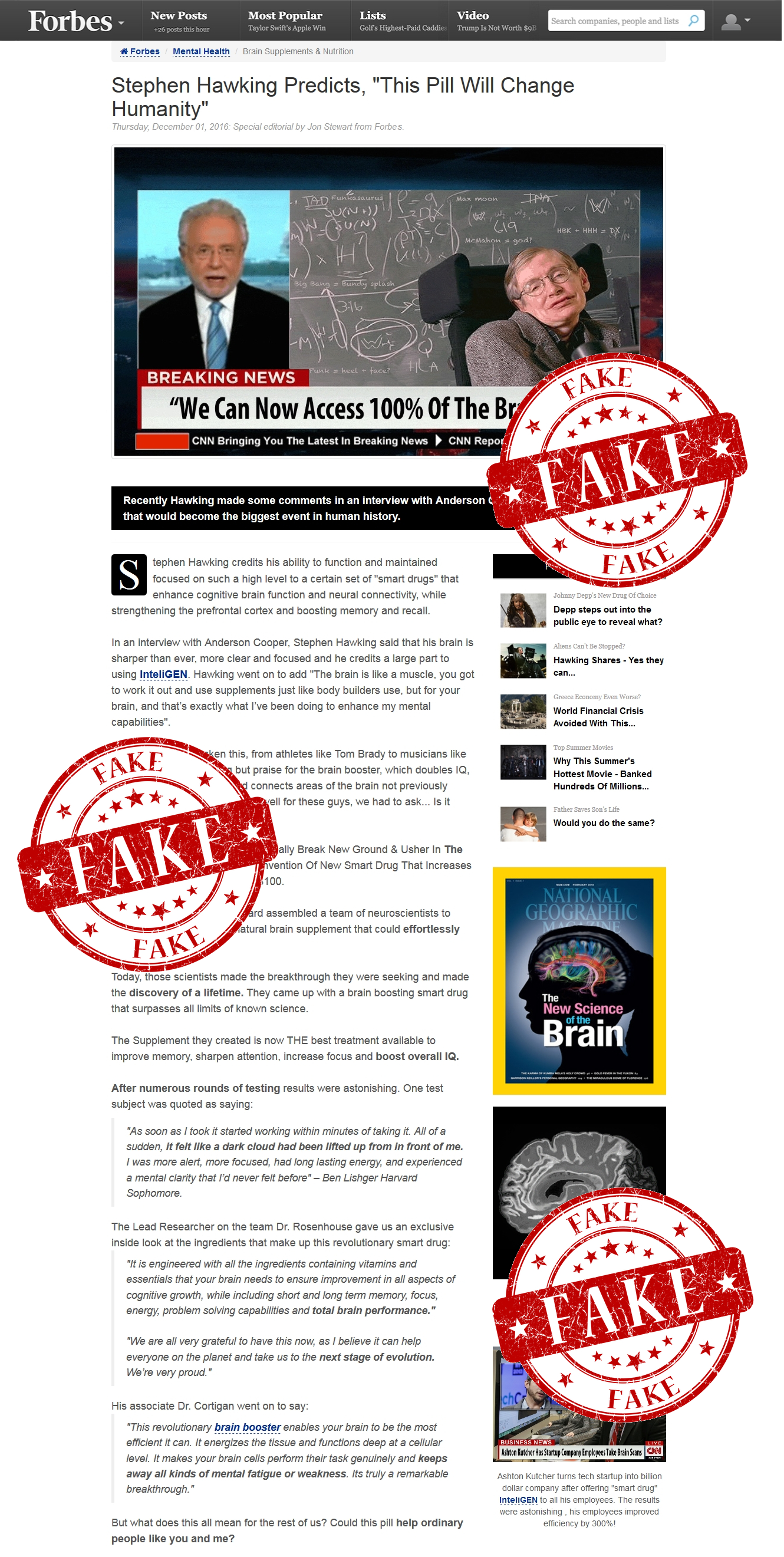 Stephen Hawking credits his ability to function and maintained [sic] focused [sic] on such a high level to a certain set of “smart drugs” that enhance cognitive brain function and neural connectivity, while strengthening the prefrontal cortex and boosting memory and recall.

In an interview with Anderson Cooper, Stephen Hawking said that his brain is sharper than ever, more clear and focused and he credits a large part to using InteliGEN. Hawking went on to add “The brain is like a muscle, you got to work it out and use supplements just like body builders use, but for your brain, and that’s exactly what I’ve been doing to enhance my mental capabilities”.

Everyone has taken this, from athletes like Tom Brady to musicians like Kanye West have nothing but praise for the brain booster, which doubles IQ, skyrockets energy levels and connects areas of the brain not previously connected. InteliGEN works so well for these guys, we had to ask…Is it safe? Above is a bird’s-eye-view shot of the fake Forbes article that we encountered recently with its partial content excerpt. We came across this article after receiving a spam message from our honeypots, containing a Baidu URL that redirects to armasphoto[DOT]ru, then redirects for the second time to a random domain hosting the said fake Forbes article.

Scams of this nature don't only arrive via email. They may also be shared via social networking platforms, chat sessions, public comments on forums, and blog posts, and (if legitimate websites aren’t careful) sometimes they’re inadvertently shared via ads on sites, especially if user browsing is done via mobile devices.

Once users click any of the multiple text links on the fake news page, they are redirected to a page about InteliGEN, the said “smart drug” in question. Below is a snapshot of one of its several purported official websites: 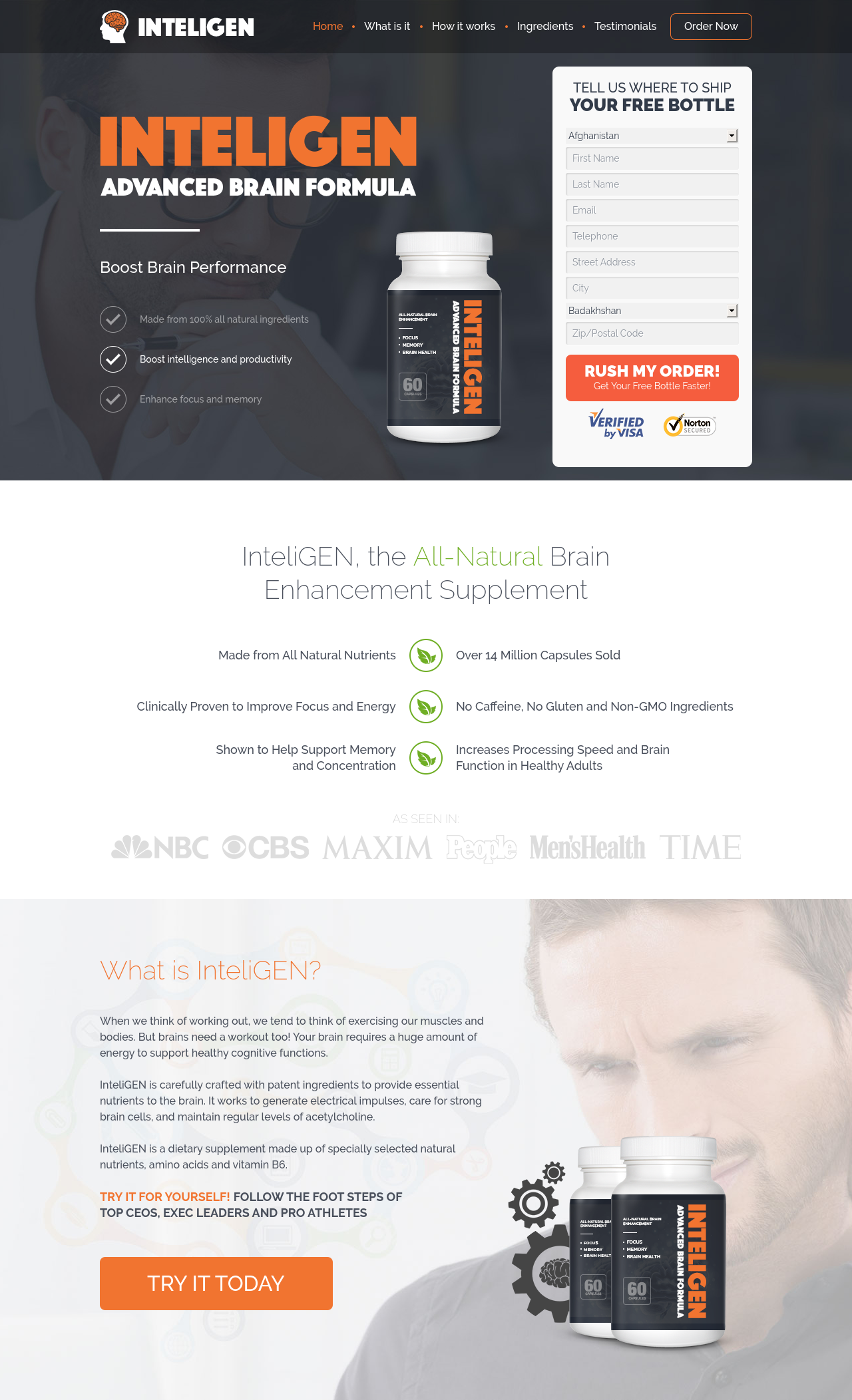 The earliest account about the fake news stories featuring InteliGEN was in August of this year; however, according to an independent blog, a string of fake brain enhancers has been on the net months earlier. Below is a list of these “brands” the said blog has accumulated: For those who want to read more about InteliGEN and its brain enhancement claims, Snopes has written this article back in September of this year.

If you encounter the above fake Forbes story via email, social media, or anywhere else on the Web, simply close that browser tab and avoid clicking the links on it. And for those who regularly surf the Web on their mobile devices, it would help if you disable JavaScript on your browsers to minimize unwelcomed redirects from sites that may be unaware that their visitors are being redirected to fake or scam pages.