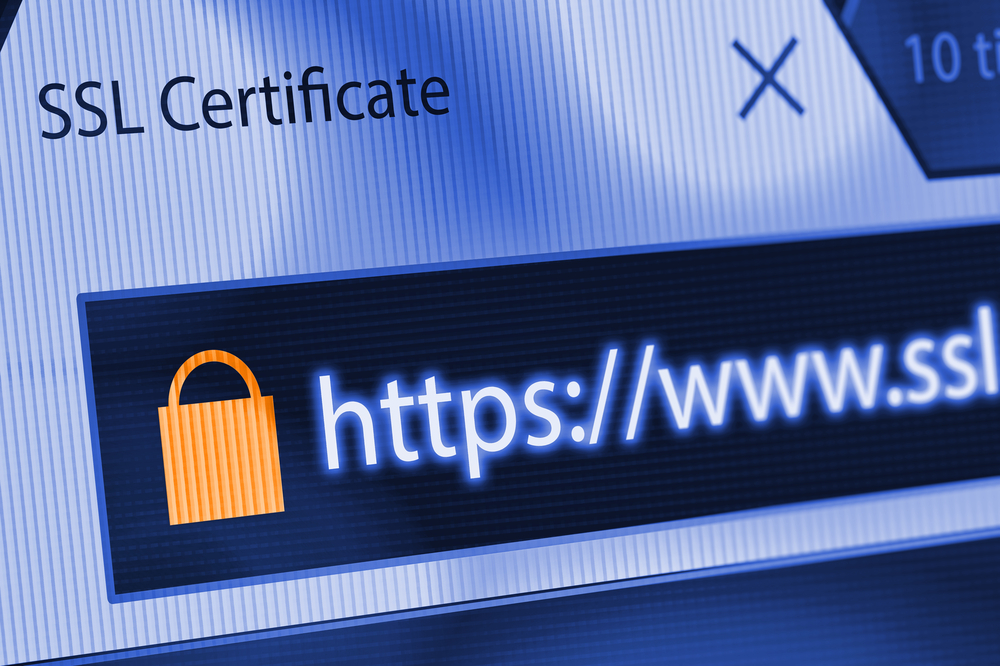 We recently updated our redirections rule in HTTPS-Everywhere, a browser extension that automatically redirects you to the HTTPS version of the website you are trying to visit. Now is a good time for us to give a short overview of how important HTTPS is. We'll also talk about a few major HTTPS-related events that happened lately.

We recently updated our redirections rule in HTTPS-Everywhere, a browser extension that automatically redirects you to the HTTPS version of the website you are trying to visit. Now is a good time for us to give a short overview of how important HTTPS is. We'll also talk about a few major HTTPS-related events that happened lately.

When we browse the web, several third-parties are able to snoop on the connection between the user and the website, including the user's ISP, law enforcement, the website's ISP, and other people in between. 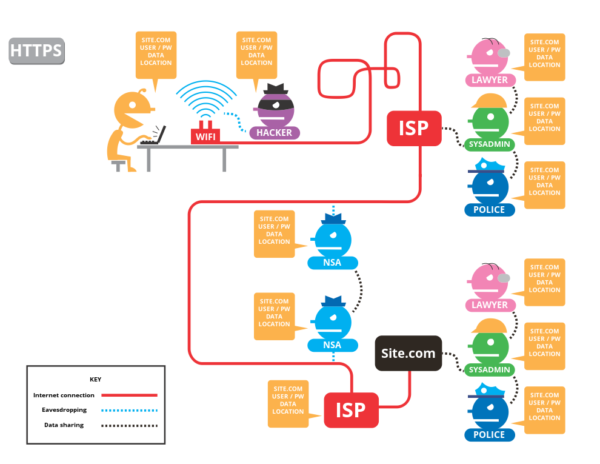 Who can snoop on your connection without HTTPS, and what can they see? (by The TorProject)[/caption]

These intermediaries are able to obtain and modify on the fly most of the information sent through the connection: the website reached, the web page name and content, the potential username and password, the user's IP address, and more. It obviously poses a lot of problems, which is why HTTPS is now mandatory for more and more websites (public sector, banks, etc.). Using HTTP with SSL/TLS (HTTPS) hides much of information compared to the picture above: 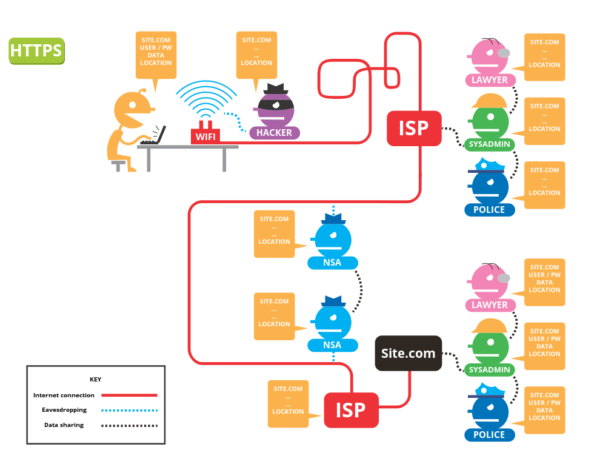 Who can still snoop on your connection with HTTPS, and what can they see? (by The TorProject)[/caption]

Now, the intermediaries only get access to the website reached and the user's IP address. The web page name, its content, the logins are no longer exposed to whoever snoops between the user and the website. It's also no longer possible to modify this data on the fly.

The security gain is then huge, as it's possible to transmit sensitive data in an authenticated way without being modified. This is possible thanks to a chain of trust established between the user software (a web browser, for instance) and a third-party who authenticated the service (a website, for instance).

This third party is called a Certificate Authority (CA). There currently are a lot of different CAs and all of them need to strictly follow the guidelines in order to stay trusted by web browsers, operating systems, and other software.

Once a service requests a certificate to be authenticated, the Certification Authority proceeds to a multiple-step process in order to verify the owner identity. If it's successful, the service will be authenticated.

However, despite the huge benefit of using SSL/TLS, anyone who requests a trusted certificate for a specific domain needs to regularly pay an expensive fee, which slows down the adoption rate.

In 2014, a new non-profit Certificate Authority was created by the ISRG with the idea to provide trusted certificates for free for everyone. The adoption was huge: Let's Encrypt has been publicly launched in 2016 and has already delivered more than 33M certificate since then, for more than 40M domains.

For the first time, more than 50% of total web page requests have been served over HTTPS in early 2017 and it's still climbing.

This widespread adoption is definitely good news for security. However, the landscape evolves very quickly, with involved parties trying to fix the remaining problems—and introduce new ones.

In order to push the adoption much further, web browsers are also taking active actions. 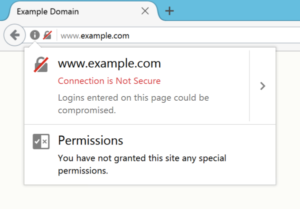 They also announced the end of support for the SHA1 algorithm, which is still used by some Certificate Authorities despite several flaws it suffers.

Another step is the introduction of Certificate Transparency, the support of which will be mandatory for all Certificate Authorities from October 2017 in order to very quickly detect wrongly issued certificates and malicious Authorities, thus, revoking them as quickly as possible.

Last but not least, they are taking strong positions against Certificate Authorities that don't follow the rules and best practices: Google and Mozilla announced their intention to distrust the “Class 3 Public Primary CA” Symantec certificate due to several failures to comply with the industry rules and other more recent security problems. This will revoke the trusted chain and will trigger a warning for users visiting a service authenticated with this certificate and may even block them to visit the website depending on their configuration unless Symantec changes their practices or agree to comply with Google and Mozilla requests which may be the case.

Despite all these actions to push more and more  SSL/TLS implementation best practices, a major issue still persists. Several antivirus software, middleboxes, or corporate appliances analyze web or mail connections to scan for malicious content. While it's easy to achieve for clear-text traffic (like HTTP), it's much more difficult to do so for SSL/TLS traffic.
As pointed by the recent study "The Security Impact of HTTPS Interception", these solutions tend to behave like spyware and play nasty with SSL/TLS while they try to decrypt it "for security reasons". As expected, it usually puts the user at risk while breaking the security chain, reducing the connection security, and reintroducing old security flaws.
Malware is seen to maliciously modify the system certificate root store (which stores the list of trusted certificates from known Certificate Authorities). They add a non-trusted certificate and set it as trusted, or remove known and legit certificate in order to break the connection to known services. The latter has been seen very recently on our forum:

List of certificates maliciously marked as untrusted by the system[/caption]

But as explained, several security software programs proceed in a very similar manner. The study has used browsers legit SSL/TLS handshakes with some being knowingly intercepted by security software (and middlebox, corporate appliances) to be able to draw a comparison based on the relationship between the user agent and Client Hello messages. They used portions of Cloudflare, Firefox update servers, and several popular e-commerces websites traffic in order to get a sufficient amount of data.
The results are particularly explicit by themselves: 90% of connections to Firefox servers, 32% of connections to e-commerce's websites, and 54% of Cloudflare connections have been observed to be less secure while being intercepted.

In short, even if only a few security software have seemed to properly handle SSL/TLS interception without introducing several vulnerabilities, all of them decreased the overall security compared to an up-to-date web browser or email client. Even worse, most of the time-critical vulnerabilities otherwise fixed years ago have also been reintroduced.
The updated HTTPS Everywhere rule we spoke about in the introduction is another step to help our users to stay secure while browsing our websites, as all our services are available with HTTPS. We try to stay up-to-date with the best SSL/TLS deployment practices.