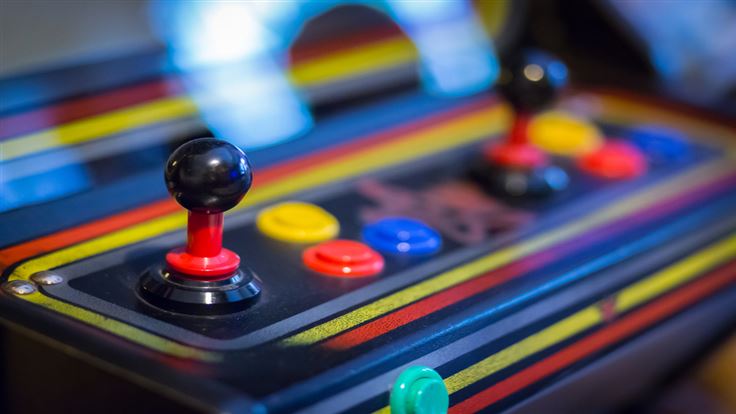 Happy anniversary to Dreamcast...and its scams

On the 20th anniversary of Dreamcast, we take a trip down memory lane; specifically, years of scams tied to the beloved console.

This month marks 20 years since the legendary SEGA Dreamcast console was first announced. Looked on fondly by gamers, it revolutionised many aspects of gaming and brought cheap(ish) online console gaming to the masses. 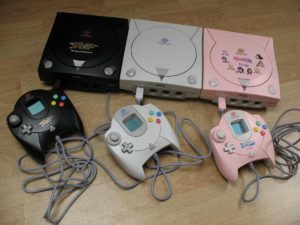 SEGA has endured many, many calls for it to come back as Dreamcast 2. The games are widely demanded as retro remakes, and it's never quite faded from public view. What you might not know is that it's been the subject of a number of phishing scams/fakeouts down the years. Here are some of my favourites.

In 2006, when dinosaurs ruled the Earth and televisions were black and white, the Dreamcast had been dead and buried for a few years already. But people still used them, modded them, and still went online with them. See, it came with a modem, and the idea was you went online via SegaNet or DreamArena to play online or just browse the web. You can still go online with them today, with a little bit of additional work. 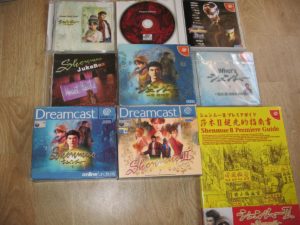 Anyone interested in games these days is likely already aware Shenmue 1 and 2 are being remastered, and there's even a Shenmue 3 on the way to help tie up the dangling story:

Back in the day, it seemed there was no chance of this ever happening despite endless requests, campaigns, fan networks, the lot. While pleas fell seemingly by the wayside, mischievous individuals were all too happy to fill the SEGA shaped vacuum.

Here's the interesting bit: Shenmue came with a disc called the Shenmue Passport, which was a crude way of popping a web browser via the game and looking at game-related content. It came to pass, one fateful day, while retro gamers were loading up their Passport disc that they saw the following: 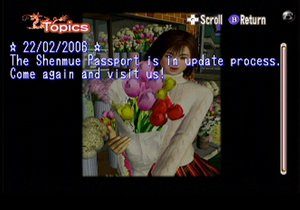 Normally it'd say "click to enlarge" under that image, but the screenshot is so old this is the kind of maximum resolution size we have to cope with. (Dinosaurs and black and white televisions, remember?)

The Shenmue Passport is in update process. Come again and visit us! Downloads were suddenly available, with the promise of "more to come." Everyone got excited, and some people even tried uploading their forklift truck racing times (long story). 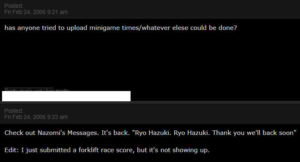 Imagine their dismay when it turned out that someone had obtained the Shenmue(dot)com domain, and decided to play a prank. For a while, the Shenmue domain came back with all the various downloadables that you could no longer obtain through the game, but the addition of the "more to come" messaging made people believe this was the first step of the game returning in new forms. All I can say to that, is "Whoops."

Some forum threads about this still remain online, and you can see some of the fallout including attempts by SEGA to reclaim the URL.

Finally I want to say sorry again to all (like I said sorry in the Shenmue BBS), but now I promise to don't do something stupid again. And sorry for my bad english (still learning) and my poor Japanese (still learning too). If anyone reach to a SEGA person, tell to him to contact me at [redacted] and I'll transfer the domain as the people of this forum told me. Sorry again. But don't loose the hope in Shenmue...

Would you like a fake Shenmue 3 announcement? Of course you would. That video now has had more than 1 million views (with some 800,000 of those landing at time of launch), and unfortunately, it's yet another fakeout. Its creator simply took footage from the older games and mashed it up with promotional material from the abandoned Shenmue Online. Here's the now obligatory thread of angry gamers.

You know how someone grabbed the Shenmue domain? Well, lightning struck twice in 2008 when someone did much the same thing with the Dreamcast website. Here's what it suddenly looked like:

"Do you still own a Dreamcast?"

Well, yes, several. Offering up the promise of a [yourname]ATdreamcast(dot)com email address, it sent the fans wild. Handing the new portal your console serial number(s), username, password, and a current email address would land you a seemingly valid yourserialnumber@user(dot)dreamcast(dot)com address. In practice, this meant the scammer ended up with a large list of emails to target with spam, and also—if people had reused passwords from their actual email for their "Dreamcast" mail—logins. My favourite thing about this was the video game website affiliate code ad hidden in the page:

If you're thinking this console has had a lot of scams hung around it, you'd be right. Step forward, 10th anniversary of said console filled with yet more shenanigans. These are most of the major Dreamcast-themed antics down the years, but there's lots of others, like the photoshopped Shenmue 3 disc, or the edited "Shenmue 3: Believe" text from a magazine preview, which sent people into a frenzy.

Back to the present

Now that Shenmue 3 is actually on the way, it's likely that we'll see some fresh new scams as the launch draws closer. You just can't keep a good console—or a smart scam—down. Having said that, you don't need to go digging around in the depths of retro gaming to find a scam. Your modern games and devices are often more than enough to keep scammers and other cybercriminals busy.