Mobile Menace Monday: Is Fuchsia OS the end of Android?

The next major Android version will be Android Q and not Android 9.1 Pie. In parallel, Google is also developing a new operating system based on its own microkernel called Fuchsia. Will this be the OS that replaces Android? Read on to find out.

It’s no secret that every year Google announces a new Android version. This time though, recent Google documents state that the next major Android version will be Android Q and not Android 9.1 Pie.

In parallel, Google is also developing an operating system called Fuchsia that’s supposedly going to replace Android in the near future. People were expecting to see a statement from Google about Fuchsia, or Andromeda (its previous codename), back in October 2017. But that never happened. Instead, we get to speculate for another year about whether or not it's here to replace Android, or is simply a playground for developers. Here's what we know so far.

A brief history of Google Fuchsia

Fuchsia is a capability-based operating system with user interface, and it has the ability to scale up to larger devices like laptops and computers. Also, it can support ARM, MIPS, and x86 processors.

It first popped up on GitHub in August 2016 with zero fanfare or explanation from Google. Unlike Android and Chrome OS, Google Fuchsia is not based on Linux, but rather Google’s own new microkernel.

In May 2017, an experimental OS leaked. However, it calling it an "OS" might be a misnomer. Basically, its system UI was up and running on top of Android and functioning like an app, but nothing else worked. Later, one of the developers working on the project teased that this was not just a dumping ground but a real project. This led to speculation that Google had larger plans for it.

Not long after, at the beginning of 2018, Google released news that the Fuchsia team picked the Chrome OS-powered Google Pixelbook as a supported device. A couple of curious users rushed out to test this claim. They confirmed that they were able to run Fuchsia on these Google Pixelbooks. This was one more big step forward. Since then, we've heard nothing more. However, we do know the components of Fuchsia, and they look promising.

Let's take a closer look under the hood of this potential future Google OS. There are four distinct layers that hold the whole operating system together. Google uses a layer cake model when describing the organization of Fuchsia code, and we will not deviate from this scheme. So, let's talk about each layer separately and in detail. 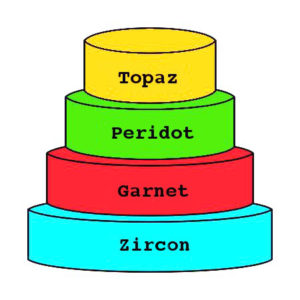 It all starts with Zircon(formerly Magenta), the Fuchsia Operating System’s new microkernel, which is based on LK (Little Kernel), a small operating system intended for embedded devices. Zircon operates as a foundation on which the Fuchsia house foundation is built, and it primarily handles access to hardware and communication between software.

The next layer, which sits atop Zircon, is called Garnet. Garnet consists of services needed for the OS, such as its network and graphics, together with the package manager and device drivers. Some of them worth mentioning here: Escher, a Vulkan-based graphics renderer with specific support for Volumetric soft shadows; Amber, Fuchsia’s update system; and Xi Editor,  modern editor with a backend written in Rust.

The next layer up, Peridot, mostly handles Fuchsia’s modular runtime app design for composition. What this means is almost everything that exists in Fuchsia, such as software and even system files, are in packages. And Fuchsia packages can be made up of smaller components instead of large, all-in-one programs. One of the major components of Peridot is Ledger. Ledger is a storage system for Fuchsia, and it provides and manages separate data stores for apps/components across devices, syncing everything through a cloud provider.

Topaz is the top layer and the one you’ll mostly likely interact with. It's similar to Android’s pre-installed (factory) applications like messaging, contacts, phone, camera, and music. The most important part is the introduction of Flutter support. Flutter is a software development kit allowing cross-platform development abilities for Fuchsia, Android, and iOS. Flutter produces apps based on Dart, an open-source, scalable programming language with robust libraries and runtimes for building web, server, and mobile apps. Due to the Flutter software development kit offering cross-platform opportunities, users are able to install parts of Fuchsia on Android devices.

In addition, Google already announced Flutter 1.0 is out. The first stable release of Google's UI toolkit for creating native experiences for iOS and Android from a single codebase is available at https://flutter.io.

Let's sum it up. Here's what we know so far: Although Google said Fuchsia is just "one of many experimental open-source projects" at the company, we can already see a potential OS brewing that could replace Android. Microsoft once tried to create something similar with the code name Singularity, but they totally failed. That's why there's a big question mark if Fuchsia will actually replace Android and Chrome OS, or putter out like some of its predecessors.

Also, let’s remember that Android was hanging around for about five years before it launched in a real product. If Fuchsia follows a similar path, and everything goes well, maybe we can expect a consumer product sometime around 2020. Right now, it's still a giant maybe. So if you're feeling stressed about learning a new OS, there is still plenty of time to adjust—save the panicking for later in 2019.