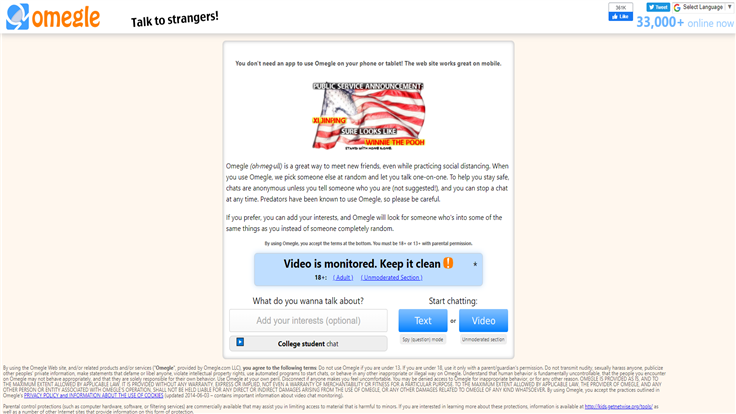 A BBC investigation into the popular text and video chat site Omegle found some disturbing things.

Social media site Omegle is under fire after an investigation found boys using the platform to expose themselves on camera, and adults exposing themselves to minors.

Omegle users are paired with a random stranger who they can socialize with via text or video chat. An investigation by the British Broadcasting Corporation (BBC) found boys and adults exposing themselves on camera, after its founder, Lief K-Brooks, claimed that he had increased moderation efforts months ago.

Just like TikTok, Omegle's popularity has exploded during the pandemic. According to data collected by Semrush, an online visibility management platform, Omegle has enjoyed a global growth of 65 million visits from January 2020 to January 2021—a staggering 91 percent growth. Users from the US, the UK, India, and Mexico have helped spark interest.

What contributed to Omegle finding fame is that TikTok users started sharing Omegle videos to their friends and followers. TikTok now has a very active #omegle hashtag, which has been viewed 9.4 billion times as of this writing.

MEL magazine's Magdalene Taylor theorized that it's the allure of talking to strangers—or being exposed what our parents warned us about: "stranger danger"—that is fuelling this growth. "People wanted to experience what the Internet was like when people were still afraid," Taylor wrote.

Investigators from the BBC, who had monitored Omegle for approximately 10 hours, were paired with dozens of other users who appeared to be under 18 years of age, even as young as seven or eight. But within one two hour period they were connected with 12 men performing sexual acts ("a common occurrence", the BBC noted), eight naked males, and a handful of pornographic ads. In instances wherein BBC investigators were paired with people who appeared to be, or identified themselves as, underaged Omegle user performing sexual acts, the broadcaster says "These instances were not recorded, and we ended both chats swiftly before reporting them to the authorities."

Keira, a 15-year-old Omegle user from the US told the BBC that "Men being gross is something me and my friends see a lot. It should be better monitored. It's like the dark web but for everyone."

Like most popular social media platforms, Omegle has a minimum age limit of 13, and its terms of use say that users under 18 should only use it with a parent or guardian's permission. It's home page also features a prominent warning: "Video is monitored. Keep it clean!". It does not attempt to verify users' age, however.

The Internet Watch Foundation (IWF), an international charity based in the UK that aims to minimize available abuse content against children, expressed concern over what the investigators have unearthed but are not surprised as this follows a trend. According to Chris Hughes, hotline director for IWF, they have found self-abuse material that were recorded from Omegle and distributed by predators online. They also know that such acts happen in a household where parents are present as evidence of background conversations they can hear in the videos.

"I'm absolutely appalled. This sort of site has to take its responsibilities seriously," says Julian Knight MP, the House of Commons Digital, Culture, Media, and Sport Select Committee chairman in an interview with the BBC. "What we need to do is to have a series of fines and even potentially business interruption if necessary, which would involve the blocking of websites which offer no protection at all to children."

The saga exposes some familiar fault lines. Age verification is fine in theory but it is difficult to do. Even if it's implemented effectively it can simply replace one set of potential harms with a different one.

The history of social media suggests that if Omegle tried to tackle the problem by increasing the number of human moderators, it's unlikely it could ever hire enough to effectively police the platform effectively.

Until (and perhaps even if) these intractable problems find a solution, parents who want to protect their children will have to educate themselves, and their children, to the hazards they might face online.