FraudTool.YAC is the detection name for Yet Another Cleaner, owned by Elex do Brasil Participações Ltda Technology Inc. It came to our attention after being notified that we were "affiliated" to the company in some way (which we are not).Upon examination, we discovered similarities in naming conventions between Malwarebytes Anti-Malware and YAC, including fragments of file names and also a specific registry key, which we use to flag when someone has potentially stolen our property for use in another tool without permission.Creating a false detection which did nothing besides opening a message box, we pushed it out at 4PM on March 1, 2015. Roughly two hours later, the file was detected by YAC, including the use of our intentionally misspelled detection name. This confirmed the use of portions of our technology without our permission, and we sent a letter from our legal team to Elex do Brasil Participações Ltda Technology Inc. with regard ceasing use of our stolen property.Shortly after our investigation, YAC had their OPSWAT certification, which assures consumers that the products have been tested for interoperability and manageability with third party software, removed. 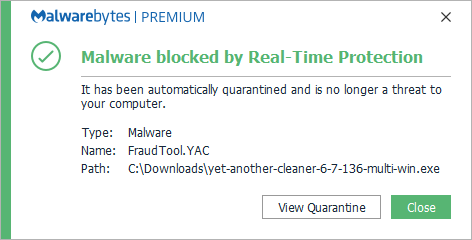 Malwarebytes can detect and remove FraudTool.YAC without further user interaction.

Yet Another Cleaner, Yet Another StealerCyberByte steals Malwarebytes’ intellectual property