It's a known fact people don't secure their devices adequately and the theft of the data on just a single device can have long-term consequences for individuals, families and companies. That's why earlier this year, Qualcomm pledged to enhance security and privacy via Snapdragon Smart Protect and recently delivered on that pledge with Snapdragon's new 820 processor.

Being able to access sensitive data anytime and anywhere is convenient but potentially dangerous. Most of us walk around with sensitive information like bank account statements and health records in our pockets and that convenience comes with a cost.

What may be even more frightening than the frequency at which new mobile security threats emerge is how truly vulnerable most people's data really is. Analysts at Gartner discovered that the majority of security breaches reported are the result of misconfiguration and mistakes made by users.

It's a known fact that people don't secure their devices adequately and the theft of the data on just a single device can have long-term consequences for individuals, families and companies.

That's why earlier this year, Qualcomm pledged to enhance security and privacy via Snapdragon Smart Protect and recently delivered on that pledge with Snapdragon's new 820 processor.

The standout security feature is on-device machine learning that can detect and protect against zero-day malware threats by identifying abnormal behaviors in programs. These kinds of behaviors include text messages sent without user interaction and applications that take photos when the display is off.

The 820 processor "can look at many aspects of what applications are doing; what resources they request, what system calls they make, and then look at a sequence of events and decide if something is malicious," Asaf Ashkenazi, senior director of security product management at Qualcomm, told Computer World.

Privacy violations are reported almost instantly via notifications, decreasing the chances that hackers will gain access to sensitive information. Better still, it can do all that without using significantly more power than previous Snapdragon models.

The scanner itself uses ultrasound technology to read deeply – right down to the pore level – into fingerprint patterns to more effectively verify the identity of anyone attempting to use a device. Fingerprint molds and other tricks can't fool it because it can sense whether the print being scanned is attached to a living human. That makes readings more accurate and leaves less likelihood of thieves being able to access data stored in stolen devices through trickery. 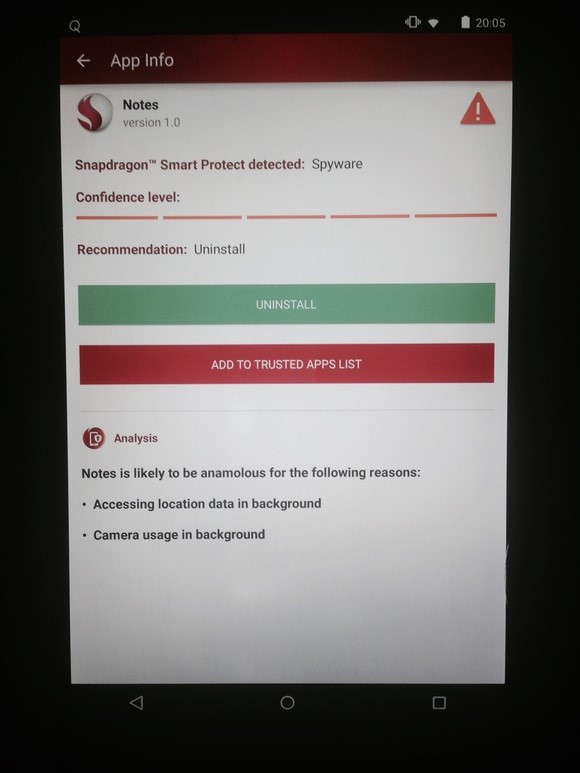 In theory, Sense ID will useful for not only verifying access to a device, but also for making payments, logging into apps and eliminating other password points.

Some critics have brought up concerns about where fingerprint data will end up, but Qualcomm responded by noting that the data is stored locally on the processor in a dedicated area that's heavily secured.

Of course, when and how these security features are implemented will be determined largely by device manufacturers. Qualcomm provides APIs and a reference user interface but it's up to the manufacturers to build the actual interfaces into new devices – or not. And for those that do, it may still be an uphill battle to help users understand how to utilize those features most effectively.

Built-in security features are still vulnerable to user error, so it's naïve to think that the 820 will protect users from any and all threats.

That's why out of the box security is almost never as effective as built-in security combined with personal vigilance.

As effective as the security enhancements the 820 will introduce will likely prove to be, hackers are adept at responding to new security innovations. So don't rely on any device's basic security features – even when those features are enhanced – to keep sensitive personal information safe.

Taking the time to protect your important data with stronger passwords and security apps in the present can save you weeks of frustration and heartache in the future.

This is a post by guest blogger Jessica Oaks, Associate Editor over at FreshlyTechy. Jessica is a freelance journalist who loves to cover technology news and the ways that technology makes life easier. She also blogs at FreshlyTechy.com. Check her out on Twitter @TechyJessy.