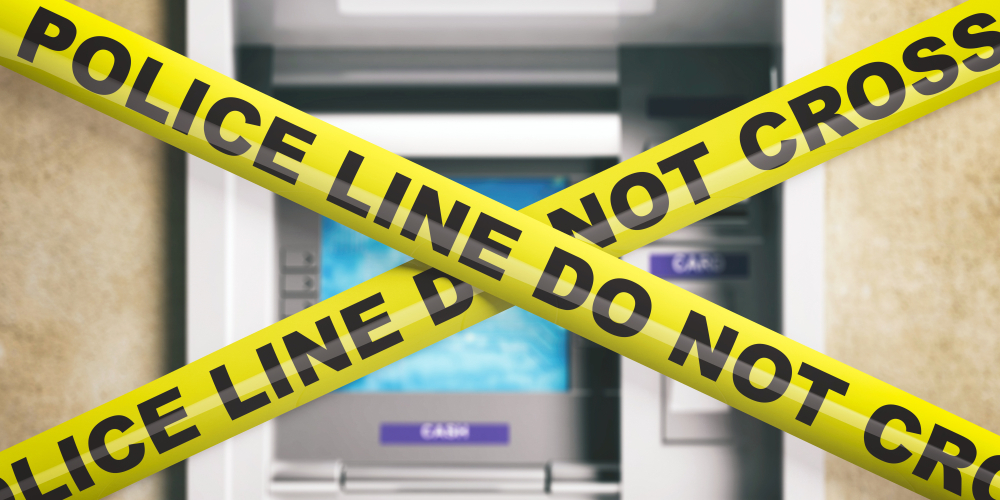 Everything you need to know about ATM attacks and fraud: Part 1

If you’re familiar with skimming, you may have also heard of shimming, card trapping, and cash trapping. These are attacks and scams targeted at ATMs. Part 1 of our series explores various ATM attack scenarios and explains what users should look out for when using an ATM.

No one was cashing out money from the ATM at the time. In fact, this seemingly odd system glitch was actually a test: The culprit who successfully infiltrated one of First Commercial Bank’s London branch servers issued an instruction to a cashpoint 7,000 miles away to check if a remote-controlled heist was possible.

Within 15 hours, 41 more ATM machines in other branches in Taichung and Taipei cities doled out an accumulated 83.27 million TWD, which is worth US$2.7 million today.

And while the Taiwan police were able to successfully nab the suspects of this million-dollar heist—most of whom hailed from European countries—many unnamed criminals taking advantage of flaws and weaknesses in ATM machines (even financial systems as a whole) are still at large.

Normal ATM users cannot fight against such an attack on their banks. But with vigilance, they can help bring criminals to justice. The catalyst for the successful capture of the heisters was intel provided by citizens who, after noticing the foreign nationals acting suspiciously and gathering relevant information—in this case, a car license plate number, and a credit card one of the suspects accidentally left behind—reported it to law enforcement.

Why ATMs are vulnerable

Just like any computing device, ATMs have vulnerabilities. And one way to understand why bad guys are drawn to them is to understand its components and the way it communicates with the bank network.

An ATM is composed of a computer (and its peripherals) and a safe. The former is enclosed in a cabinet. This is the same whether the ATM is a stand-alone kiosk or a "hole in the wall." The cabinet itself isn’t particularly secure or sturdy, which is why criminals can use simple tools and a lock key purchasable online to break into it to gain access either to the computer or the safe.

The computer usually runs on Windows—a version specifically created for ATMs. ATM users don’t see the familiar Windows desktop interface because access is restricted. What we do see are user-facing applications that aid us in making transactions with the machine.

Up to now, many ATMs have still been running on Windows XP. If the OS is outdated, expect that the software in them may need some upgrading as well. That said, criminals can take their pick of which exploits to use to make the most of software vulnerabilities and take control of the remote system.

In some cases, interfaces like a USB port visible in public can encourage users with ill-intent to introduce malware to the machine via portable device. Since security software may not be installed in them, and there is a significant absence of authentication between peripherals and the OS, there is increased likelihood of infection. To date, there are already 20 strains of known ATM malware discovered.

The cash dispenser is directly attached to the safe where the cash is stored. A compromised computer can easily give criminals access to the interface between the computer and the safe to command it to dispense cash without using stolen customer card information.

The traffic between the ATM computer and the transaction processing server is usually not encrypted, making it a breeze for hackers to intercept transmitted data from customer to bank server. Worse, ATMs are notoriously known for implementing poor firewall protection, which makes them susceptible to network attacks.

Other notable weaknesses are missing or misconfigured Application Control software, lack of hard drive encryption, and little-to-no protection against users accessing the Windows interface and introducing other hardware devices to the ATM.

Types of ATM attacks and scams

Hacking a bank’s server is only one of the many known ways criminals can get their hands on account holders’ card details and their hard-earned cash. Some methods are clever and tactical. Some can be crude. And others are more destructive and dangerous. Whatever the cost, we can bet that criminals will do whatever it takes to pull off a successful heist.

We have highlighted types of ATM attacks here based on their classification: terminal tampering, physical attacks, logical attacks, and social engineering.

For this post, we’ll be delving deep into the first two. (The second two attacks will be featured in Part 2 of this series.)

The majority of ATM fraud campaigns involve a level of physically manipulating parts of the machine or introducing devices to it to make the scheme work.

Skimming. This is a type of fraud where a skimming device, usually a tandem of a card reader (skimmer) and keypad overlay or pinhole camera, is introduced to the machine by placing it over the card slot and keypad, respectively. The more closely it resembles that of the machine’s, the better it'll work (and less likely to draw suspicion).

The purpose of the second reader is to copy data from the card’s magnetic stripe and PIN so the criminal can make forgeries of the card.

Of course, there are many ways to capture card and PIN data surreptitiously. They all fall under this scheme. Examples include skimming devices that tap into the ATM’s network cables, which can intercept data in transit.

Criminals can up the ante of their skimming campaign by purchasing a second-hand ATM (at a bargain price) and then rigging it to record data. These do not dispense cash. This, by far, is the most convincing method because wary account holders wouldn’t think that an entire ATM is fake. Unfortunately, no amount of card slot jiggling can save their card details from this.

Skimming devices can also be slotted at point-of-sale (POS) terminals in shops or inside gas pumps. Some skimmers are small enough to be concealed in one’s hand so that, if someone with ill intent is handed a payment card, they can quickly swipe it with their skimmer after swiping it at a POS terminal. This is a video of a former McDonald’s employee manning the drive-thru window caught doing just that.

Shimming. One may refer to shimming as an upgraded form of skimming. While it still targets cards, its focus is recording or stealing sensitive data from their embedded chips.

A paper-thin shimming device is inserted in the ATM’s card slot, where it sits between the card and the ATM’s chip reader. This way, the shimmer records data from the card chip while the machine’s chip reader is reading it. Unlike earlier skimming devices, shimmers can be virtually invisible if inserted perfectly, making them difficult to detect. However, one sign that an ATM could have a shimming device installed is a tight slot when you insert your bank card.

Data stolen from chip cards (also known as EMV cards) can be converted to magnetic stripe data, which in turn can be used to create fake-out versions of our traditional magnetic stripe cards.

If you may recall, issuers once said that EMV cards offer better protection against fraud compared to traditional bank cards.

With more users and merchants now favoring chip cards, either due to convenience or industry compliance, it was expected that criminals would eventually find a way to circumvent the chip’s security and read data from it. Regrettably, they didn’t disappoint.

Card trapping. Although not as broadly reported as other ATM attack schemes, card trapping is alive and, unfortunately, kicking. Of late, this has victimized a 17-year old who lost her life savings and a friend of a former detective from Dundee, Scotland.

Card trapping is a method wherein criminals physically capture their target’s debit or credit card via an ATM. They do this by introducing a device, usually a Lebanese loop, that prevents the card from getting ejected once a transaction is completed. Criminals steal their target’s PIN by shoulder surfing or by using a small hidden camera similar to those used in skimming.

Another known card trap is called a spring trap.

Cash trapping. This is like card trapping, only criminals are after the cash their target just withdrew. A tool—either a claw-like tool, a huge fork-like device that keeps the cash slot open after an ATM withdrawal, or a “glue trap”—is introduced to the ATM cash slot to trap at least some of the cash or most all of it.

Cash trapping that doesn’t involve pincer implements normally use what is called a false ATM presenter. This is a fake ATM cash dispenser placed in front of the real one.

If wit isn’t enough to pull off a successful ATM heist, brute force might. As rough, unsophisticated, and sloppy as they look, criminals have achieved some success going this route.

Crooks who’d rather be loud than quiet in their activities have opted to using explosives—solid and gas, alike—chain lassoing the machine to be uprooted and dragged away, ram-raiding, and using a digger to dig a wall-mounted ATM out of a building. A sledgehammer, crowbar, and hammer have worked wonders, too.

In its fourth consecutive year, overall physical attacks on ATMs continue to increase in Europe, according to the European Association for Secure Transactions (EAST). From 2017 to 2018, there was a 16 percent increase in total losses (from US$34.6 million to US$40.2 million) and a 27 percent increase in reported incidents (from 3,584 to 4,549). The bulk of losses was due to explosive or gas attacks followed by robbery and ram-raiding.

“The success rate for solid explosive attacks is of particular concern,” said EAST Executive Director Lachlan Gunn in the report. “Such attacks continue to spread geographically with two countries reporting them for the first time in early 2019.”

The ATM Security Working Group (ATMSWG) published a document on best practices against ATM physical attacks [PDF] that financial institutions, banks, and ATM merchants can refer to and use in their planning to beef up the physical security of their machines. Similarly, the ATM Industry Association (ATMIA) has a handy guide on how to prevent ATM gas and explosive attacks [PDF].

Know when you're dealing with a tampered ATM

Financial institutions and ATM providers know that they have a long way to go to fully address fraud and theft, and they have been finding and applying ways to step up their security measures. Of course, ATM users shouldn’t let their guard down, too.

Minimize the likelihood of facing a tampered ATM—or other dangers lurking about—by reading through and following these tips:

Before visiting an ATM

While using the ATM

After withdrawing from an ATM

One doesn’t always have to keep withdrawing money from the ATM. If there are ways consumers can pay for goods without using cash from an ATM, they should at least consider these options.

Many are claiming that using the contactless or tap-and-pay feature of your card or smartphone is an effective way to combat account (and ATM fraud) entirely.

For Part 2 of this series, we’ll be looking at logical and social engineering attacks criminals use against ATMs and their users. Until then, be on the lookout and stay safe!