What is your plan if your device is lost or stolen? On Android, we’ve had to rely on third party apps to locate our device, but there is good news if you’re looking for something from Google, who began rolling out Android Device Manager with Google Play Services.

Two of the biggest security concerns for smartphone users are losing your device and having it stolen--they’re pocket-sized and can be easily misplaced or grabbed by the wrong hands.

Ok, so some of them aren’t really pocket-sized any longer, but smartphones have become a huge part of our lives and we store a huge amout of our personal data on them. If we lose track of them, we tend to panic, although often they are just misplaced at home.

However, sometimes they do wind up in the wrong hands.

What is your plan if your device is lost or stolen? On Android, we’ve had to rely on third party apps to locate our device, but there is good news if you’re looking for something from Google themselves, as recently Google began rolling out Android Device Manager with Google Play Services.

This feature will allow you to locate your device using its GPS functionality. With it enabled, you can also request the phone to ring, or in more serious situations, wipe data from your phone.

It’s pretty basic at the moment, with no way to interact with it as an app; however, Google plans to release a companion app in the future. 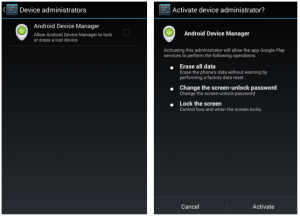 Running as a Device Administrator might raise some eyebrows, but it makes sense as a security feature, as you don’t want it to be easily disabled or messed with by a third party app. Also, you’ll need be logged into the Google account assigned to that device.

Google has created a web interface that uses Google Maps to locate your device. As you can see, there isn't much to it on the surface, but it gets the job done.

While it may be lacking in features right now, hopefully the companion app will bring along more.

Google is late to the party, way late, in offering such a feature.

However, in their defense, Google has also implemented a lot of security features for Android and appears to be taking it seriously.

We hear a lot about how Android is prone to malware, but the devices it runs on are also prone to getting lost or stolen, so having another lost phone option is a good thing.

If you aren't using a device locating app I suggest you look into using one, whether it be Android's or one of the many third party apps available. I look forward to more improvements to Android and seeing what iOS 7 has to offer.