Adobe Reader has a history of vulnerabilities and gets exploited quite a bit. Once exploitation succeeds, a malware payload can infect a PC using elevated privileges. For these reasons, it’s good to know how to analyze PDF files

However, Adobe Reader has a history of vulnerabilities and gets exploited quite a bit. Once exploitation succeeds, a malware payload can infect a PC using elevated privileges.

For these reasons, it’s good to know how to analyze PDF files, but analysts first need a basic understanding of a PDF before they deem it malicious: here is the information you’ll need to know.

A PDF file is essentially just a header, some objects in-between, and then a trailer. Some PDF files don’t have a header or trailer, but that is rare. The objects can either be direct or indirect, and there are eight different types of objects. 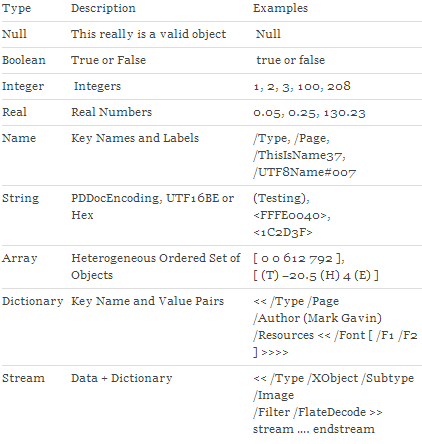 Direct objects are inline values in the PDF (/FlatDecode, /Length, etc) while indirect objects have a unique ID and generation number (obj 20 0, obj 7 0, etc). Indirect objects are usually what we’re paying attention to when analyzing PDF malware, and can be referenced by other objects in a PDF file.

The first thing we need is analysis tools.

I find the PDF tools by Didier Stevens to be some of the best out there. Stevens’ tools are all written in Python and are very well documented. For this particular malware, we’ll be using Stevens’ tools along with some other tools used to de-obfuscate and debug code.

PDFiD is the first tool we will use, and is a very simple script that searches for suspicious keywords. Here is the output from the scan of our target file. 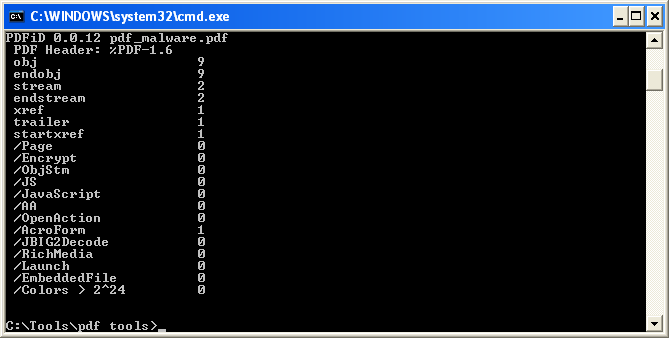 The output from PDFiD reports there are nine objects. From those objects there are two streams, along with an AcroForm object. Let’s observe the AcroForm object first. For this, we’re going to use a different tool by Stevens called pdf-parser, which will take a closer look at specific PDF objects. 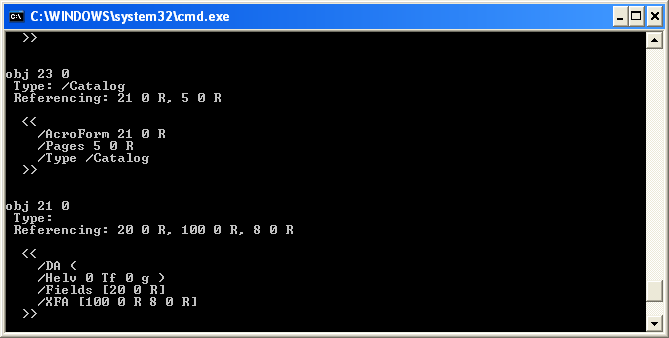 The AcroForm object references object 21 below. From object 21, we see the text "XFA", which stands for XML Forms Architecture, an Adobe format used for PDF forms. Next to XFA we see two objects referenced: obj 100 and 8. Since there is no obj 100, we’ll take a look at obj 8 instead. 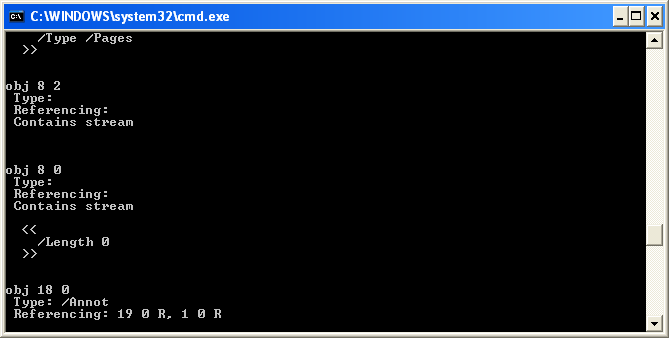 There are two objects available with different generation numbers: obj 8 0 and the other 8 2. The generation number simply represents the version number of the object and increments whenever there are multiple instances of one object ID. However, obj 21 references obj 8 0, so let’s stay focused on the first one.

Here is where things start to get interesting. Inside 8 0 we see there is a stream that appears to be zero-length (/Length 0). Streams are basically large sets of data. With a malicious PDF, that usually means JavaScript exploit code is inside, which will likely lead to the execution of shellcode.

Now that we have our eyes on 8 0, we should investigate it further using pdf-parser. We’re going to look specifically at the raw output of 8 0 using the following command (the output was quite long, so I sent it to a text file):

And now we’ll look at the output, which appears to contain some JavaScript. Inside the script you’ll see a very long sequence of characters. It would seem the length of the data stream is not 0 as originally led to believe. 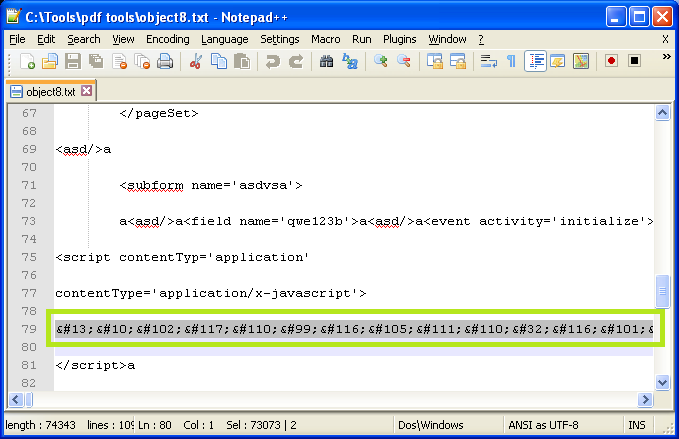 In order for us to understand what these character references represent, we need to consult the ASCII table. However, due to the sheer amount of character references we have, it would take some time to convert these manually. We will either need a script or some special tool to perform rapid conversions. Thanks to Kahu Security, we have such a tool called the Converter.

Converter is a simple program used to take data and convert to/from many types, and also permits bitwise operations. For this PDF malware we can copy the NCRs into Converter and select ‘Decode HTML’. 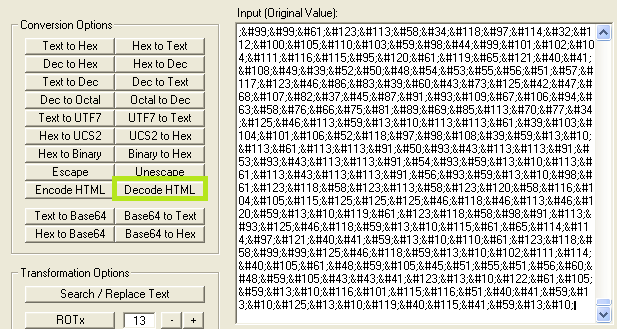 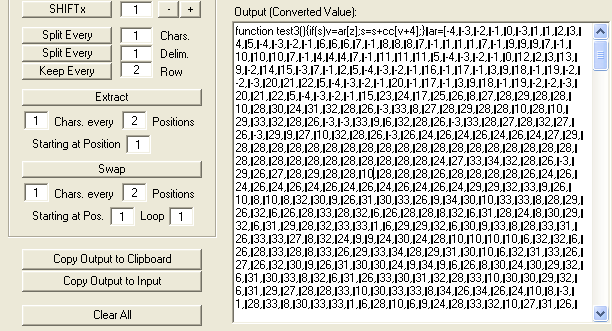 Now we can paste this JavaScript into a new text file and clean it up. However, there seems to be a problem once we paste the code. 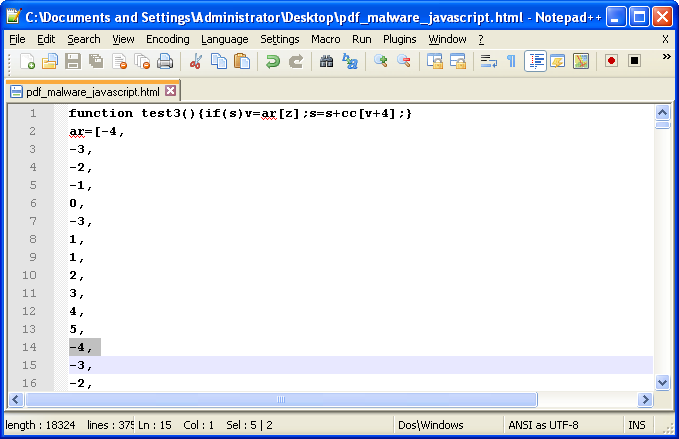 It looks like every value in the "ar" array is printed on a separate line. With almost 4,000 lines in the new document, this would take too long to fix by hand.

The reason for this is that NCR 10 represents a line feed (LF), and is placed after every comma in the array. If you looked at the image of the decoded output, it actually shows up as a little black bar, almost resembling a pipe or sheffer stroke character ("|").

In order to fix this we only need to do a Find/Replace and remove all occurrences of NCR 10. Afterward, we just repeat the conversion process using Converter, and place the decoded output into a new text file, this time wrapped in <script> tags. 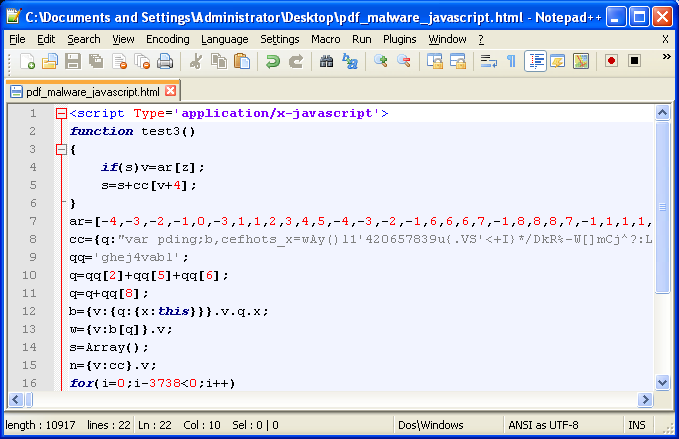 That looks much better. Now at only 22 lines, we can analyze the code further with ease.

However, when reading the code, it appears there is still some work to do. It would seem the JavaScript is still slightly obfuscated. From here it might be a good idea to debug the code to quickly understand what’s going on.

To do that, I’m going to use Firebug, an Add-on for Mozilla Firefox. Firebug is a multipurpose tool for analyzing web pages and also allows for inspecting and debugging of JavaScript. There are other JavaScript debuggers available, but I like this one.

After adding some <html> tags, we can load this file into Firefox and start debugging. I went ahead and set a breakpoint on the last line and executed the code. From the picture below, it can be seen that "w" decodes to "eval()", a JavaScript command commonly used in malware to execute code, while "s" is the de-obfuscated code itself.

At this point we can copy the code from "s" and paste it into another text file. After cleaning up the code and adding some comments, it appears we have arrived at our final destination. 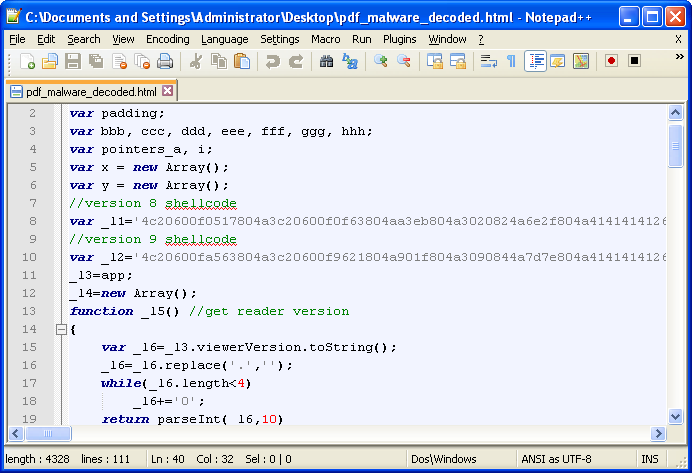 A quick glance over the code reveals a heap spray followed by a NOP sled. Afterward successful exploitation, the embedded shellcode will execute. 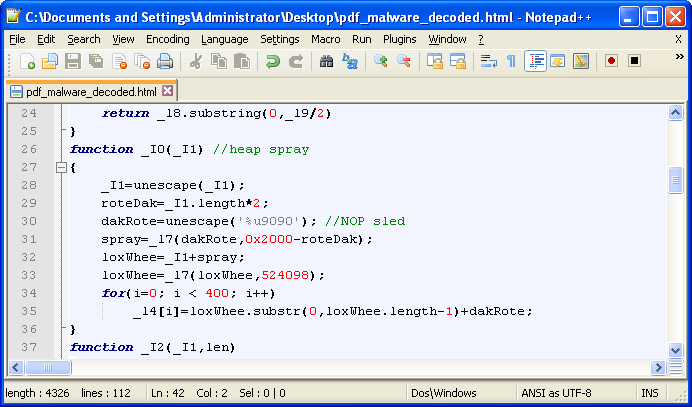 When examining the shellcode in a Hex Editor, we can see the website contacted by the malware, which is hxxp://[edited]/w.php?f=0&e=4. If you look closely, it also appears the downloaded malware will be registered as a DLL on the host as wpbt.dll (slightly obfuscated with some junk bytes). 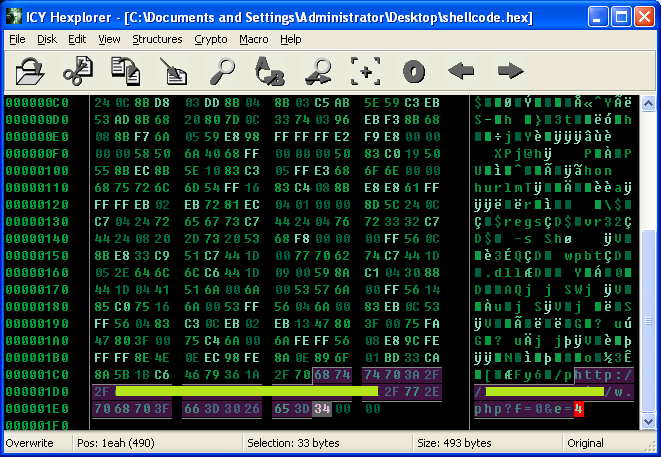 And that’s all there is to it. We don’t really need to analyze the file any further, as we can already understand what’s going to happen when the PDF file is executed.

The good news is this will not affect users who update Adobe Reader regularly, as the exploit only targets users with version 8 and 9. In addition, a lot of web browsers like Google Chrome have integrated their own PDF viewers to prevent users from exploitation.

To stay safe using Adobe Reader, ensure you have automatic updates enabled, only view PDFs from trusted sources, and consider alternate viewers. Adobe PDF exploits can provide attackers with a foothold in your PC that can easily lead to malware infections, so you may also want to consider dropping it from your PC altogether if you don’t require it.

Stay tuned for more analysis on malicious documents and other media.