Windows XP's retirement: Google takes a poke at it

We've known for a while now about Microsoft's decision to retire the very popular Windows XP operating system next year, but here comes Google to XP users rescue?

We've known for a while now about Microsoft's decision to retire the very popular Windows XP operating system on April 8, 2014 --it's part of the Redmond-based company's lifecycle policy to offer a minimum of 10 years of support for the Windows and Office products suite--but here comes Google to XP users rescue?

Windows XP's market share is still considerable both in end user and corporate environments. According to StatCounter, it represented roughly 20 percent of all operating systems as of September 2013: What the deadline means is that Microsoft will no longer provide automatic security updates past that date. In other words, using Internet Explorer and Office 2003 will be like playing Russian roulette with a great chance for your computer to get infected.

Microsoft is urging its XP users to migrate to a supported OS such as Windows 8: 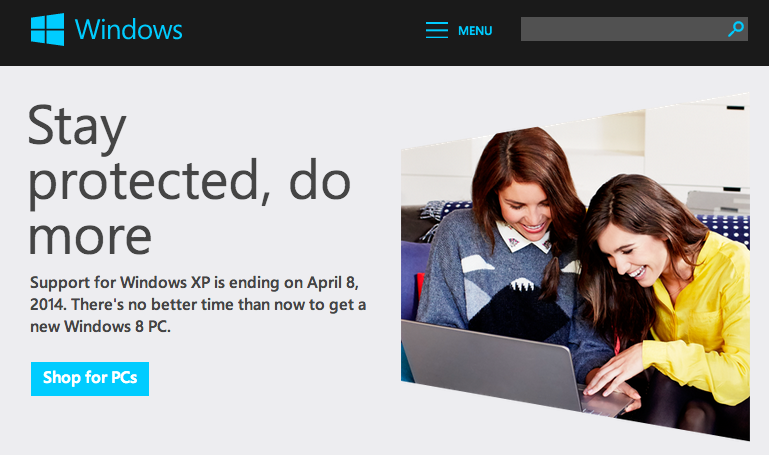 In a blog post published yesterday, Google announced they had decided to extend support for Chrome on XP until 2015.

Their rationale is that many people and companies will not be able to immediately upgrade from XP and they want to keep offering web protection during that transition period.

This decision sparked some criticism towards Google for putting users at risks and delaying the migration period. Obviously, the ideal and best thing to do from a security standpoint is to simply stop using Windows XP for good.

But is this actually going to happen? Time will tell, but convenience, cost, hardware limitations and compatibility are some of the many reasons why we can't expect to see an immediate drop in XP's market share.

It could be rightfully argued that Google is trying to attract Internet Explorer users and have them make the switch to Chrome.

But considering that most malware infections come from the browser, Google may actually have a point here. Stats grabbed from a popular exploit kit dubbed Styx as well as other kits show that there are non-existent or low infection rates among Chrome users.

Some theorize that once Microsoft cuts off support for XP, malware authors will target users even more than before. To add to that, it is very likely that we would see a surge in malware infections if security vendors were to stop support at the same time.

While users should definitely start thinking about migrating to a current and supported OS, Google and security vendors like Malwarebytes will maintain updates against potential XP threats beyond the cut-off-date from Microsoft.