Fake World Cup emails will drag you into a 419 scam. Stay on the ball.

From the spam traps: a World Cup 2014 419 missive, with a wonderfully enlightening subject line: "gkxzhlfgjs‏". 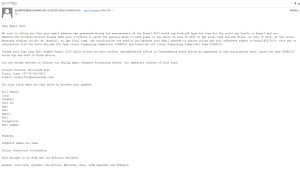 We wish to inform you that your email address was generated during the announcement of the Brazil 2014 world cup kick-off days and time for the world cup finals in Brazil and won GBP3000.000.00,Three Million Pounds CASH plus 2 tickets to watch the opening match to take place in Sao Paulo on June 12 2014 at 5pm local time and the final, on July 13 2014, at the iconic Maracana stadium (in Rio de Janeiro), at 4pm local time. The notification was send to you because your email address is active online and your reference number is Brazil912/2014. this was in conjunction with the South African LOC Team (Local Organizing Committee) FIFA2010 and Brazilian LOC (Local Organizing Committee) Team FIFA2014.

Please note that your Ref: Number Brazil 2014 falls within our Afro booklet representative office in Johannesburg South Africa as indicated in the verification data, since the last FIFA2010 world cup was held in South Africa.

You are hereby advised to Contact our Paying Agent (Payment Processing Center) for Immediate release of your fund.

For your claim send the info below to process your payment

FIFA2014 Games Loc Team Online Promotions Coordinator This Brought to by FIFA and Its Official Partners Adidas, Coca-cola, Hyundai, Kia Motors, Emirates, Sony, VISA superbet and 888sport This is, of course, complete nonsense and if you see one of these in your Inbox feel free to send it straight to the trash. You won't receive free tickets, or a cash prize or anything else for that matter - all they want is the money in your bank account and they'll spin out any set of lies required to get their hands on it. Major sporting events are traditionally a huge draw for scammers and there will no doubt be many more of these to come from now until June.