"To view this content, you need the Tumblr Plugin"

Be careful around Tumblr blogs asking you to install plugins to view their content.

While digging through a number of popular hashtags on Tumblr, we noticed the following page located at

Fantastic URL aside, it sports a message which should set a few alarm bells ringing and the URL is being sent around via the following piece of Tumblr message spam:

Trails off a bit at the end there, doesn't it? The ramble is accompanied by a selfie of a young chap with the kind of abs I'd need an inflatable muscle set or some expensive CGI to replicate, which is clearly going to entice at least some people to go clicking on things.

As for the webpage: 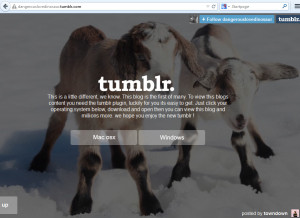 The page displays two buttons - one for Mac OSX and the other for Windows - but both links lead to the same download. Anybody clicking will end up with a .jar file which seems  to be a wrapper for a malicious Java based Bot. The Bot in question has been around for a couple of years and we're still digging into the file to see exactly what it's doing in this case.

Despite the claims up above, the "new Tumblr" is still exactly the same as the old Tumblr - because there is no new Tumblr trying to hide content behind installs. Honestly, I have it open right now. There's humorous gifs, pictures of cats and an obscure Spongebob reference I am never going to be able to make sense of, and at no point has anybody asked me to install something to continue.

Keep on Tumbling, and be very suspicious of Tumblr blogs which claim to be gated in some way. It's one of the oldest and most successful ways of getting up to some funny business, and unfortunately people continue to fall for it. If you think something has gone horribly wrong with your Tumblr (not including horrendous page designs, you're on your own with that one) then hop on over to the Tumblr Account Security Page and see if the advice there can get you back up and running.

Christopher Boyd (Thanks to Jerome for additional information)