Could it be that one of the biggest games on console and PC is now available on handheld devices?

We've seen the ever popular GTA V used as bait in many cases of "What are you kids on the Internet up to this time", and here's one which focuses on the allure of portability to reel in unsuspecting fans of the title.

A number of sites are claiming to offer up mobile versions of the game, despite it requiring an Xbox 360 / Xbox One / PS3 / PS4 / decent gaming PC to run - not to mention the disk space taken up, which is a fair amount to say the least (you aren't going to find many phones with 50GB available just to be able to install a game). The sites in question are

Despite this, mobile gamers are being told they can run it on Android, iOS and PSP. The three sites we looked at all share similar designs, displaying what they claim to be GTA V running on the aforementioned devices and a download link. 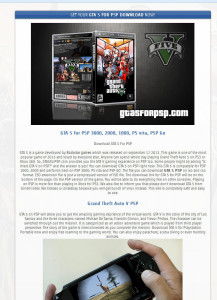 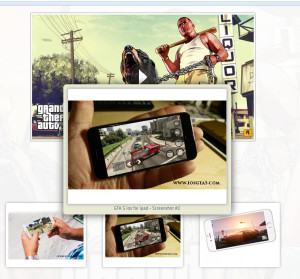 Note that they also use the well worn technique of saying "As seen on..." and listing numerous well known online publications (none of which appear to mention their mysterious version of GTA V). 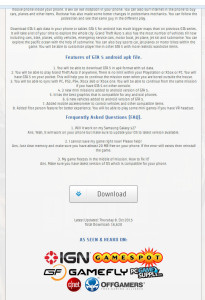 In fact, the creators of the Grand Theft Auto titles, Rockstar Games, don't mention a handheld version of GTA V anywhere either. It's almost like it doesn't exist. This is probably a good time to make a callback to that 50GB game size, and then see how big one of the mobile downloads is: 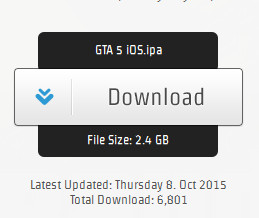 2.4 GB? That's either an amazing feat of downsizing the game, or most of it is missing in action somewhere. Here's some survey pages for your perusal:

We advise you not to get your hopes up should you stumble across promises of handheld versions of incredibly complicated (and incredibly large) games seen on consoles and PC. If in doubt, check the official website of a game developer and discover straight from the source which platform your desired evening's entertainment runs on.

In the above case, there is no official version of GTA V for handhelds whatsoever - so you may wish to slam on the brakes and head off in another direction.