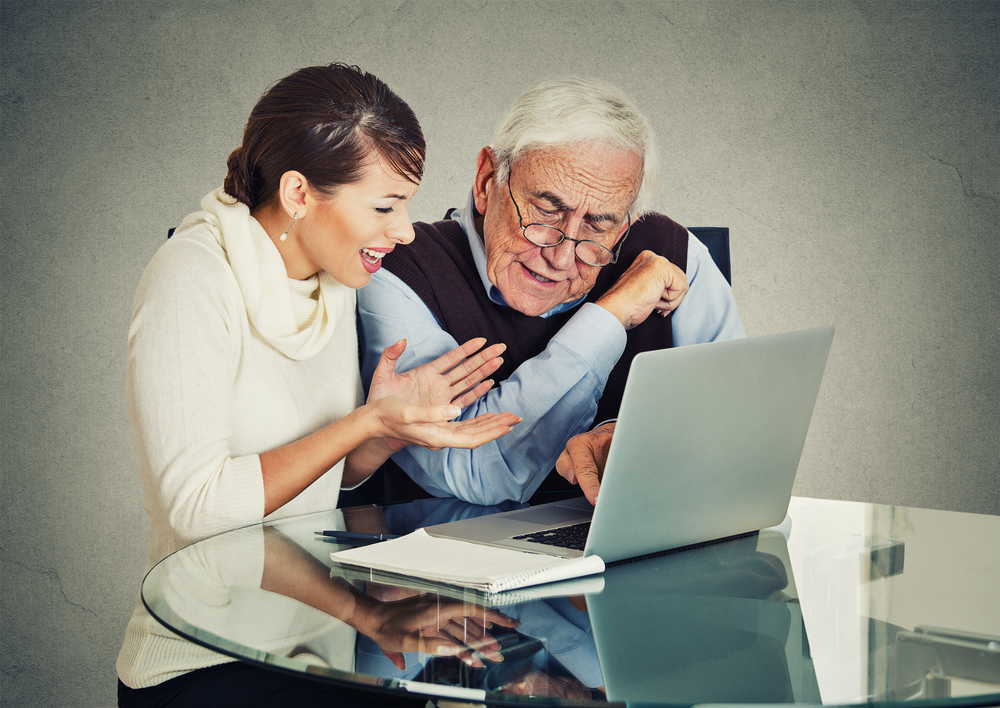 Hi, honey. It's mom. My phone is acting funny again.

Often, older generations must turn to their progenitors for help with technology. What are their frustrations and concerns, and how can younger generations better help?

Whether it’s setting up access to a Netflix account on a smart TV or enabling personal email on an iPhone, some people—of all ages—have a hard time figuring out user-friendly technology. However, often times it's older generations that have to turn to their progeny for everything from uploading pictures to the cloud to deciding whether it’s safe to open an attachment.

Despite results from a 2018 study from the Pew Research Center, which found that there has been "significant growth in tech adoption in recent years among older generations—particularly Gen Xers and Baby Boomers,” Millennials and Gen Zs field many "how do I?" technology questions from their aging parents.

While older generations are embracing technology, such as smart phones and smart TVs, the constant need to update “can be difficult for seniors to keep up with,” according to Senior Living. “Often seniors need help from caregivers or cell phone technicians to understand new features to their devices.”

The frustration from older users over rapidly-evolving new technology, updates to software, and a laundry list of security best practices to keep track of—like needing 27 different passwords—can lead to tech and security fatigue, which causes users to bury their heads in the sand instead of having to keep up with it all. What's easier, then, is calling up a younger friend or family member for help.

That's all well and good, but do younger generations always know the right thing to do? And are they sick of serving as the family IT guy? How can disparate generations reconcile their relationship with technology and with each other while still staying safe?

My phone is acting weird

When seniors experience user challenges, they most often turn to the Internet or their families for tech support, according to 2019 Link-Age Connect Technology Study. Nicolas Poggi, who works for a software security firm in Santiago, Chile, agreed, explaining that his 54-year-old mother is constantly reaching out with questions about her phone.

"I think the main thing that keeps coming up is the fear that everything has a virus in it," Poggi said. "I usually get a call or a sneaky message from Mom saying, 'Hey, I think my phone has a virus or something. It's acting odd, can you give me a hand?'"

Sometimes the problem is one of misconfigurations. “She’s misconfigured half of her settings by accident and the other half trying to fix the initial misconfigurations,” Poggi said, adding that his greatest technology concerns for his mother are privacy and security.

Yes, privacy and security are important concerns for most technology users, but Linkage Connect explained that when it comes to the elderly, “the biggest barriers that keep them from adopting new technology today are the complexity, understanding it all, the cost, and having no easy way to learn it.”

Verizon’s 2019 Data Breach Report found that 32 percent of data breaches involved phishing, where cybercriminals send emails pretending to be from reputable companies to coax people into revealing personal information, such as passwords and credit card numbers. Not surprisingly, young people are concerned that their aging parents could easily fall victim to a phish or some other type of fraudulent scam, especially because scammers are keen to target older users, whom they believe to be more vulnerable.

When asked about her perceived ability to detect fraud and scams, Poggi’s mom said, “I think there are obvious ones, like the email ones or those images that promise to make you a millionaire. Aside from that, I don't really know what other types of scams are out there. It worries me that I don't know what to look out for. I know how to keep my social media private, but I don't really know who is looking at what or where.”

Poggi agrees with his mother's assessment, but worries that the areas where she lacks awareness could lead to compromise.

“I don't think their generation adopted technology in the way we have," said Poggi. "They are way behind with best practices. Basic things like password hygiene, phishing, fake websites, fake offers, still get to them. Still, they seem to have adopted enough technology to make for an awfully dangerous combination: a lack of security plus online banking plus social media.”

Older generations are increasingly becoming major consumers of connected devices. In fact, 94 percent of Americans over the age of 50 use technology to stay connected with their friends and family members, according to the 2019 Tech and the 50+ Survey published by AARP.

Yet, many in the 50+ age group have a love-hate relationship with technology. The Linkage Connect survey covered a wide swath of participant ages—nearly half a century, actually. Some said they had no use for technology. Others said they couldn’t imagine life without it. Most respondents appreciated being able to use technology but found the learning curve frustrating.

“Finding time to learn to use and to fix technology is the biggest problem," said one woman in the 75–79 age range.

A woman nearly 10 years her senior said, “I find it frustrating when setting up a new electronic device such as a printer, computer, phone, etc. Instructions are supposed to be simple, but there always seems to be something missed. Need a person to walk me through it.”

While others noted their reliance on family to help them navigate the complexities of their connected devices, one woman in her sixties said, “I find it interesting, but the advancements come so rapidly, it is hard to keep up. And the expense is ridiculous.”

Though technology admittedly makes some aspects of life simpler, another 75–79 year old woman said, “At times, I feel that if I have to learn one more thing I will scream, but it is keeping me current with the world.”

According to AARP, technologies targeting, “the health, wellness, safety, and vitality of adults 50-plus are proliferating." Technology innovators obviously crunched the numbers from the Census Bureau in preparation for January's CES 2019 in Las Vegas, where many of the devices introduced for older generations ranged from awesome to odd.

As people age, however, they want to make things simpler. Simplicity and ease of use should be the goal of technologies and devices that are designed for older generations. The Linkage Connect study noted that, “With the 50+ population representing approximately 115 million in the United States alone today and the expectation for that number to reach 132 million by 2030 (from the US Census Bureau), it is now more important than ever to understand the older adult consumer.”

No one wants to fumble through learning how to use a connected device. If it’s too challenging, it’s useless. Asking for help can be embarrassing for older generations who have to turn to their children or grandchildren to learn how to use a new gadget, which is one reason why the American Society on Aging advised, “It is imperative that in addition to making technology more intuitive for older adults, training older adults in how to use technology must be a national priority.”

What’s important to remember is that education needs to be accessible and personal—at any age. In order to enable adoption that improves the lives of elders, manufacturers, and younger helpers, need to meet them where they are.

“They want to learn 'hands on' with others. Teaching older adults how to use these devices, in the manner in which they want to learn, could prove to benefit them as they age,” the Linkage Connect study said.

Older adults who feel overwhelmed should feel free to take the initiative to ask for help. And younger family members or friends should be patient and take a beat to not only fix the problem, but walk people through it. In the end, both generations can benefit from the extra security awareness practice.