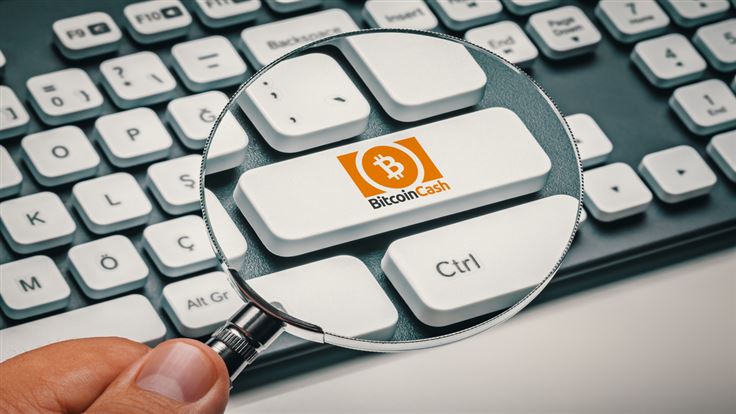 We take a look at a number of sites claiming to offer free Bitcoin Cash money.

Here’s an interesting evolution on a well-worn scam, taking one profit generating fakeout and turning it into something else entirely.

For years, gamers have been stuck navigating the treacherous waters of fake video game giveaways. With so many actual genuine gaming giveaways around, you’re never quite sure if a site offering free Xbox points, or Steam credits, or downloadable content, is going to do what it claims.

Typically, the site will ask you to pick your reward then “verify you’re a human” or just help a fictitious process along by clicking an ad or filling in a survey or downloading a file and hoping it isn’t malware.

The gamer never gets their rewards. They may well end up with a few unexpected visitors on their desktops, though.

One enterprising individual has clearly had enough of the video game wilderness and decided to try and make money in a less explored realm.

Step up, Bitcoin—or to be more accurate, Bitcoin Cash. Bitcoin Cash is a form of cryptocurrency that went its own way in 2017, and then split again in what I can only call the great Bitcoin cash war of 2018 when two rival groups imagined vastly different directions for the fledgling currency.

The intention, with or without split, was supposed to be a digital coin that functioned more as a currency than a digital investment. It is this fertile ground that sets the scene for the site we’re about to look at: Bitcoin-cash-generator(dot)com. 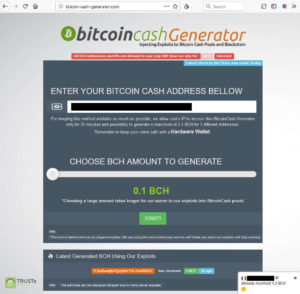 The website claims to “inject exploits into Bitcoin Cash pools and blockchain.” They attempt to put pressure on visitors right from the start, claiming they limit use of the tool to 30 minutes per IP address, up to a maximum profit of 2.5BCH. That’s around £815/US$1,024, so it's a tidy bit of profit for jumping some hoops. For reference, the minimum amount a visitor can ask for is 0.1 BCH, roughly £32/US$41.

Whatever slice of the pie a visitor picks, they're going to get a little bit of money back...Or are they?

What hoops do we have to jump through?

Unlike many similar gaming-themed scam sites, surprisingly little. With no social aspect, there’s no real reason to plaster share buttons all over the place or ask to send to friends. This is all about the site visitor only. They simply have to “Enter your Bitcoin cash address bellow [sic]” and move a slider to select their desired amount. (And really, who will pick anything less than the maximum?) Then, they hit the start button.

Pop-ups abound of other IP addresses receiving amounts. “People” in the chatroom confirm it works great. Any hesitation a user might have had is likely gone at this point. 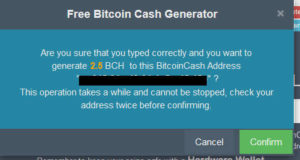 After confirming the desired amount, we’re off to the “this website is doing nothing at all” races.

Those familiar with the fake game points/ free gift card websites will know the drill. A collection of random boxes pops up, claiming to be hacking the Gibson. The more vaguely technical sounding it all is, the better—anything that sells the vision of actual, honest-to-goodness exploits doing strange exploity things in the background.

“Injecting transfer requests into the blockchain.” I hate when that happens.

Well of course, it always helps when you connect to the old blockchain maintenance channel.

This one is  a particular favourite of mine, as it’s every TV show’s attempt to show you some hacking on a screen in one hilarious image:

Multiple claims are made during the supposed hacking process that various attempts have failed to grab the cash, but they continue to persevere with it. Whereas many survey scams are almost instantaneous, these things really stretch out the illusion and make visitors wait a good few minutes while the titanic (fictional) battle rages in the background.

Sadly, success comes with a price. At this point, ye olde survey scam would ask you to fill in some offers. The free video game points site would ask you to install a dubious game or spam links across social media.

They need you to make a small donation, because of course they do. The site reads as follows:

The BitcoinCash network requires a small fee to be paid for each transaction that goes to the miners, else a transaction might never be confirmed. To ensure your transaction confirms consistently and reliably, pay the miners fee of 0.00316 BCH for this transaction at: [wallet address]

The request for 0.00316 BCH (roughly £1/US$1.30) is made regardless of whether you ask for the minimum/maximum amount of free cash. It doesn't scale upwards. 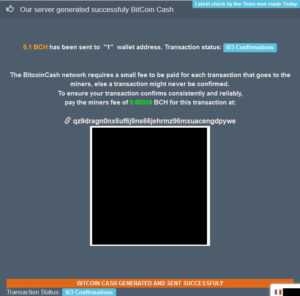 The only thing that does work in all this is website visitors sending small amounts of cash to the people behind the website(s). As mentioned earlier, we've seen a few other sites doing much the same thing, such as freebtc(dot)uw(dot)hu and smartcoingenerator(dot)com: 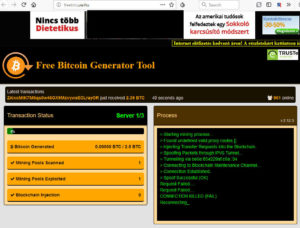 One interesting aspect of this type of scam branching out into digital coinland is increased visibility into site owner antics. You can only go so far with survey scams or random social media profiles sending out spam links. Here, however, much of what constitutes digital transactions are out there in the ether as a matter of public record.

There are entire sub-industries devoted to analysis of Bitcoin transactions and how people make their digital cash flow down the money tubes. Generally, most folks' experience of watching the Bitcoin wheels go 'round are focused on plain old Bitcoin. Bitcoin Cash is a little different, but you can still take a look behind the scenes.

The various sites we've seen offer up different addresses to send their "small transactions," and not all of them are focused on BitCoin Cash. With reference to the one used on Bitcoin Cash Generator, they do appear to have made a little money so far. It seems doubtful anyone is going to retire from it, though.

Another scam bites the dust

These Bitcoin Cash Generator sites are yet another sub-genre of survey scams that need to be filed under the "Something for nothing" label. If getting your hands on digital currency was this easy, everybody would be doing it. Instead, it's a unique selling point for a handful of websites lurking in the corners of the net.