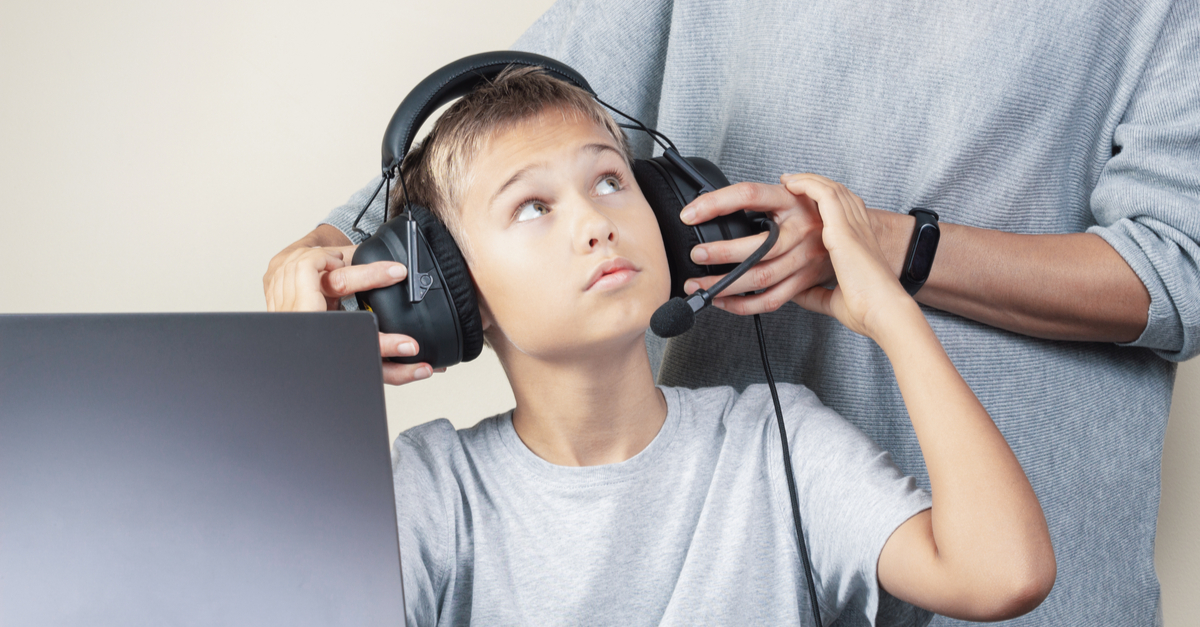 Online games can be a minefield for parents. Our writer played some of the most popular for a week to see how he got on.

These are just some of the things I heard a six-year-old boy shout at his iPad while I was babysitting one evening. I was disturbed, yet compelled to learn more.

Babysitting is always a puzzling experience for me. Why are their hands always sticky? Who eats a dry hamburger (literally just meat and bun)? Most puzzling, as it pertains to this story, what weird video games are children playing and are these games safe?

I asked my young ward for a list of his favorite games and played them all for a week. These games were Among Us, Roblox, and Fortnite. All three games are free, but there are some hidden costs to be aware of, which I’ll go over later. Chances are your kids (tweens and younger) are also playing Minecraft, Overwatch, and maybe even Grand Theft Auto Online. For this piece, I tried to focus on the games you might download for your kids just to get them out of your hair for an hour. Besides being free, each game is available on a handheld device and features a kid-friendly learning curve.

To give myself the best chance of experiencing the kinds of dangers your kids might face, I tried to make decisions as a six-year-old would. Typically this meant putting absolute trust in my fellow players and spending money as if it were a limitless resource.

For the record, this reporter has no kids. I was an avid gamer through my twenties and I still play one or two marquee games a year, though I hadn’t played any of the games reported on in this story beforehand. I’m currently playing Cyberpunk 2077 (on Google Stadia).

So, after a week of playing video games, here’s what I found.

YouTube videos featuring the sci-fi online multiplayer game Among Us were watched four billion times in September. US representatives Alexandria Ocasio-Cortez and Ilhan Omar both played the game with popular streamers on Twitch in the lead up to the 2020 elections. It’s safe to say Among Us is having a cultural moment—and no wonder. It’s free (on iOS and Android), it’s addictive, and it’s all about banding together with your fellow humans to vote out a deranged monster.

In the game, players play randomly as either a crewmate or a shapeshifting alien creature posing as a crewmate (the imposter). As an imposter, your goal is to kill all the crewmates. As a crewmate, your objective is to identify all the imposters on the ship and eject them into space by way of plurality vote.

When an imposter kills a crewmate, a short animation plays showing how the imposter performed the kill. The animations are bloodless and cute, as far as killing goes. One of the kill animations features the imposter producing a fencing sword from its throat and stabbing the victim. My young ward declared the “throat kill” as the “best type of kill” in Among Us and I agreed nervously as a single bead of sweat formed on my brow.

During my time with the game, I found it to be safe overall. There are built-in filters that stop players from swearing and any player can vote to kick another player out of the game for inappropriate behavior.

The game offers in-app purchases for cosmetics that can be used to dress up your player. These cosmetics cost real-life money. If your kids are playing on your personal phone or tablet, be sure to adjust your settings and require a password for every purchase to prevent them from going wild with your credit card.

I stared into the abyss, and the abyss stared back. That about sums up my experience with Roblox.

Roblox isn’t so much a game as it is a massive platform for users to create their own games. As it stands, there are over 40 million games on Roblox. Most of them are terrible. Many are weird. Regardless of what game your kids are playing within the world of Roblox, they’ll need Robux, which is the in-game currency used to purchase clothing, items, upgrades, etc. Unless your enterprising little ones are creating and selling content in the game, they’ll need you to spend real-life money to get Robux for them. Payments are drawn from your Google, Microsoft, or Apple account. Whatever restrictions you have in place for in-app purchases will apply.

We’ve written about Robux Generator scams before, but here’s a quick rundown. A Google search for “free Robux” produces any number of suspect Robux generator sites. On these sites, you’ll be asked to enter your username and the amount of Robux you want. After some handwaving designed to suggest things are happening in the background you’ll be redirected to a sketchy survey site. I tried several of these sites and I didn’t get any Robux.

There are Robux scams within Roblox itself. I found countless games advertising free Robux. Most of these were just bad, boring games that did nothing. One game asked me to buy a special shirt that would somehow allow me to earn more Robux. I bought the shirt and, no surprise, it did nothing. Another game asked me to click a box on-screen 100 times to win Robux. After a few dozen clicks, the box was discreetly replaced with another box. Clicking this second box bought me another worthless shirt.

Fortunately, avoiding Robux scams like these is easy. Educate your kids. Let them know not to share their username and password with anyone. You should also turn on multi-factor authentication (MFA) within Roblox. Doing so will make it a lot more difficult for a hacker to access your child’s account, even if they have the password.

Wandering around the cartoonish world of Adopt Me! I was accosted by dozens of tiny little street urchins asking me to be their dad or offering me sketchy deals on exotic pets. And this is the most popular game on Roblox in a nutshell. Players choose to be either a baby or a parent. If you’re a parent, your job is to take care of a baby. If you’re a baby, then you need a parent to take care of you. Most players, however, focus their efforts on acquiring and trading pets. This is where I ran into trouble and your kids may too.

Adopt Me! has a built-in trading system that protects players from getting ripped off. Both players have to put an item into the trade window and accept the trade. As I found out, there are ways to get around these protective measures. I spent a little Robux to quickly acquire a rare and desirable pet to see if I could bait someone into scamming me. Another player offered to trade me a legendary pet, but the catch was that it had to be a surprise. This is called a “trust trade.” I put my pet in the window and accepted the trade. The other player walked away without giving me anything in return.

I was able to report the player and that's about it. For its part, Roblox says it cannot reverse or return lost items or currency.

I didn’t experience any other scams while playing Adopt Me! There are accounts of sexual predators using Roblox to target children. Though, I never saw anyone say anything untoward during my time with the game. Roblox uses a chat moderation system to filter out offensive, adult, or otherwise inappropriate content. Regardless, you should warn kids not to share personal information and not to use third-party chat apps outside of Roblox. Parents can also turn off online chat, but that does take a lot of the fun out of the game. And if you're worried about your kid's Legendary Unicorn being stolen by some tween grifter, you can use the game's settings to limit who they can trade with.

Think of Jailbreak as Grand Theft Auto for kids. Players can choose to be a criminal and earn money zooming around town robbing banks. Alternately, players can choose to be a cop and earn bounties by arresting criminals. There are Game Passes that your child can purchase to unlock items within the game. Again, they’ll need Robux, which you’ll have to buy for them using real-life money. Players can sell or trade items to other players. Your little ones should proceed with caution whenever trading online with players they don't know.

The Jailbreak crowd appears to skew older than Adopt Me! While playing Jailbreak, I saw players gently teasing other players and players with vaguely inappropriate usernames. Other than that, Jailbreak is a fun, safe game I wouldn’t mind playing if I had nothing better to do.

Epic Games, the studio behind Fortnite, has been making headlines lately over its legal wrangling with Apple. The complaint stems from Apple's 30% cut of all in-game purchases—no small sum when you consider Fortnite pulled in $1.8 billion in revenue in 2019. While the game is free to play, you're really only getting half the game if you don't spend some of the in-game currency called V-Bucks.

Players have the option to buy a Battle Pass using V-Bucks. Battle Passes, in turn, allow players to unlock items and cosmetics (aka skins) by completing tasks within the game. With the battle pass system, players and parents know exactly what loot they’ll be getting for their money. Like all the other games featured in this story, V-Bucks are purchased using real-life money. If you have reservations about sharing your credit card info, you can buy V-Bucks gift cards at brick and mortar stores, including Target, Walmart, and GameStop.

My time with Fortnite was quite safe. Combat is cartoonish and non-violent with defeated players disappearing into the ether in a flashy show of lights. There was some crap talk, but players can report other players if things get out of hand. Accounts with desirable skins and weapons can be the target of hackers who turn around and sell stolen goods. Warn kids not to share their username and password or any personal information with anyone online.

Play with your kids

We’re at an interesting confluence of events right now. First, many of us are under shelter in place or stay at home orders. Second, kids are bored out of their minds. It’s all too easy to hand kids the Nintendo Switch or the smartphone and let them have at it. While the games covered in this story are relatively harmless, there are still some scams to watch out for. The best way to keep an eye on your kids is to play with them. My young ward and I had a great time playing on the same team in Fortnite. If video games aren't your thing, at least check your account settings and make sure your kids need permission to make any purchases.