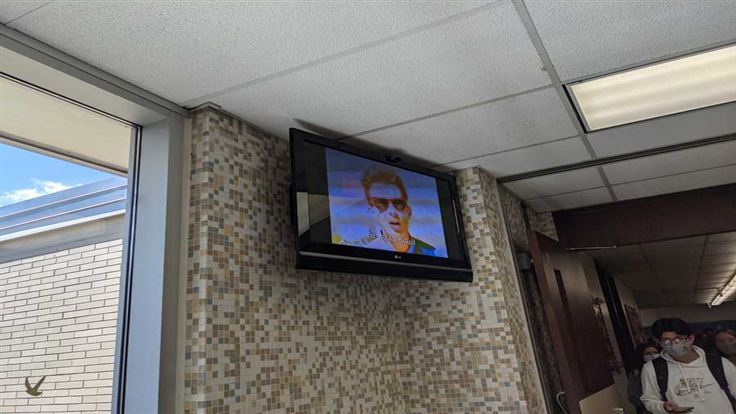 We almost always get a not-so happily-ever-after ending when someone decides to hack an organization to show them their technological weak points. Not here.

A student at a high school in Cook County successfully hacked into the Internet-of-Things (IoT) devices of one of the largest school districts in Illinois, and gave everyone a surprise.

In case you don’t know, rickrolling is an internet meme and a type of bait and switch prank wherein people are expecting one thing (clicking a link, for example) but instead are shown a clip of the 1987 song "Never Gonna Give You Up" by Rick Astley instead.

The end-result of Minh’s work, captured by Minh's brother

"This story isn't one of those typical rickrolls where students sneak Rick Astley into presentations, talent shows, or Zoom calls," Minh writes in his personal blog, "I did it by hijacking every networked display in every school to broadcast 'Never Gonna Give You Up' in perfect synchronization. Whether it was a TV in a hall, a projector in a classroom, or a jumbotron displaying the lunch menu, as long as it was networked, I hacked it!"

In the post, Minh further revealed that everything started during his freshman year, a time he admitted was "the beginning of my script kiddie phase". With the help of friends, he was able to scan and find more than 8 million IPs in the internal district network. With that many IPs, he was bound to find devices that were exposed—and he certainly did.

Security cameras weren’t the only devices exposed to the student network. Minh was also able to have complete access to the district’s Internet Protocol Television (IPTV) system, a system that delivers multimedia content over IP-based networks. However, he wasn’t able to pull off the school prank he’d been planning until three years later.

Thanks to scheduling changes schools had to introduce in response to COVID-19 restrictions, Minh and his crew were able to pull off their scheme while avoiding disrupting classes and—yikes!—significant tests. Minh also said that they were prepared to abort the operation if they found that tests were taking place.

Once Minh had finished his prank, he sent a pentest report to the district's technical supervisors.

"A few days after sending the report through the anonymous email account, we received an email response from D214's Director of Technology," Minh continued in his blog, "The director stated that because of our guidelines and documentation, the district would not be pursuing discipline. In fact, he thanked us for our findings and wanted us to present a debrief to the tech team! Later, he revealed the superintendents themselves reviewed and were impressed by our report!"

This is not a typical response from an organization when someone steps forward to show them their technological vulnerabilities. Many in the cybersecurity and tech industries know someone—or have themselves experienced—getting burned by groups or individuals for simply letting them know about what’s wrong with their systems and what they can do better. Let us not forget those two physical penetration testers getting arrested and jailed for doing a job they were hired to do.

Of course, something like this could happen even when there’s support for a bug bounty program. Take, for example, the case of drone-maker, DJI, who offered a bug bounty program but then decided to modify the terms of its scope and attack the security researcher who found major flaws in its product.

It’s no surprise, then, to see Minh’s peers expressed distrust against the D214 administration, even though the latter was open to the possibility of working with him and his crew to remediate and audit the problems.

"We decided I would reveal myself to present our debrief slides with the others remaining anonymous in the Zoom meeting," Minh continues, "I had planned on announcing my involvement from the beginning since I wanted to publish this blog post. (I was also pretty much the prime suspect anyways.) But, just in case, I scheduled the debrief to take place after I graduated."

At the end of the day, everything went "extremely well" for everyone involved. Suffice to say, Minh and his crew were one of the lucky ones to belong to a district that is objective enough to see past the prank and focus on the underlying technological vulnerabilities that made it possible to begin with.

The district has also displayed a stance that potentially opens great cybersecurity opportunities not only to Minh and his crew but also to those who aspire to do what they have done in the name of vulnerability disclosure (sans the pranks, of course). This is something that the industry welcomes and what is urgently needed.

"This has been one of the most remarkable experiences I ever had in high school and I thank everyone who helped support me," Minh concluded.

Let us be the first to say that this fine lady is not the only one doing the happy dance.