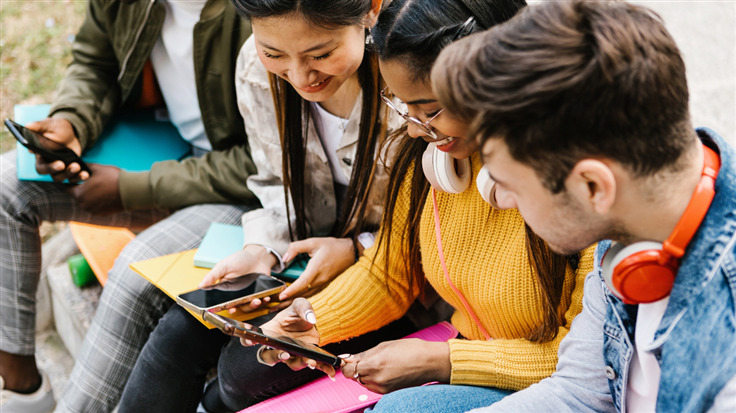 Gas, a positive social network for teens (no, really)

We take a look at a fairly exclusive app designed for teens which claims to come with none of the nastiness found elsewhere online.

A new social network is currently in the news, billed as a positive space for teens to enjoy themselves. I’m all for positive spaces online, but what is it, and will teens really be happier there than (say) Instagram, or even just hanging out in WhatsApp groups?

Launched in August of this year, Gas is an iPhone app aimed at teens. When you sign up, you use location services to allow the app to figure out which schools are nearby. During sign-up you add friends, and according to this review, it requests access to your contacts.

Once all of this is done, it allows users to share polls (with four options for each, based on what I’ve seen so far) and these happy, friendly polls let you “see who secretly likes you”, or feel a dopamine rush as you find out you’re most likely to do a really cool thing at band practice.

That seems to pretty much be it. The Gas app team refer to it as “The only wholesome place left on the internet” on their TikTok profile. In fact, with the app being very region restricted, it’s one of the first times I’ve had to figure out what something actually does by trawling through TikToks in the first place.

How restricted? We’re not talking about countries. We’re talking about individual states in the US, with Michigan being the initial launchpad, with several more added since.

A little too exclusive

This is the very definition of a super exclusive Internet club, but often to the app’s detriment if you’re trying to find out what it does and does not do. For example, I had to find out about location tracking and messaging policies through a TikTok video.

For reference, the TikTok clip states that messaging is not allowed; all that you can do is “answer polls about friends”. It also says that Gas “only uses your rough location to join a school and never saves it”. Even so, it’s not unreasonable to think that even if rough locations are never saved, having a user associated with a physical object (the school) means an association to location as far as the users are concerned, even if the app has no interest in such things. Generally speaking, school buildings don’t move around very much!

On the flip slide, this is something very unlikely to cause an issue given how limited the app is in terms of functionality. There isn’t much scope for social engineering when there’s no messaging allowed and only polls to click on.

There don’t appear to have been any major complaints in relation to the app so far, and as far as we can tell, users' experiences have been consistent with the developers' claims. Even so, there are still a lot of unknowns here. Are you able to create custom polls, or is everything done via pre-selected polls which you can lightly customise? We don’t know, and poll creation isn’t touched on in the news.

Is there a possibility of Fear of Missing Out (FOMO) if children aren’t selected in polls? Perhaps, but as the developers mention, children who haven’t been picked “recently” will find themselves automatically dropped into other polls more frequently to give them a chance. How online can we consider these teens to be if all of their possible routes for interaction with other people is clicking one of four options in a poll? And how online will they feel, if their peers are using Instagram, SnapChat, WhatsApp, and TikTok?

Perhaps they’ll grow bored of Gas, or use it alongside their usual haunts. There isn’t enough data available yet, so we’re just going to have to see where it goes. Cyberbullying is an awful thing to have happen to your child, and the increasingly long list of things you need to do in these situations is always a cause for concern.

If the app is doing what it claims and kids are getting a positive buzz from interactions from a fairly closed circle, who am I to argue?