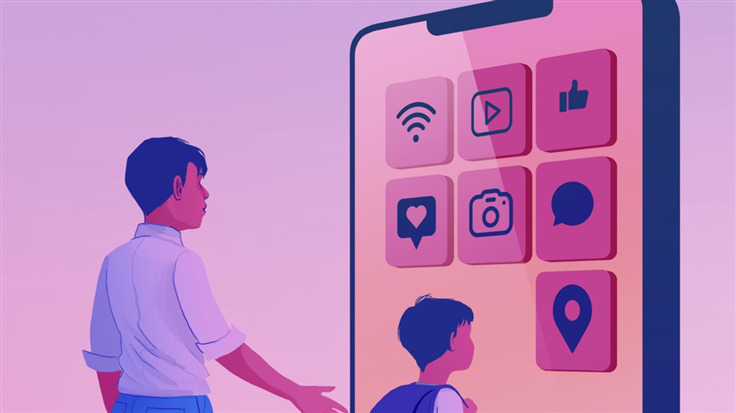 Only half of teens agree they "feel supported online" by parents

Only one in two teens agree that they " feel supported online" by their parents, according to new research from Malwarebytes and 1Password on growing up and raising children online

Not enough children and teenagers trust their parents to support them online, and not enough parents know exactly how to give the support their children need.

Those are some of the latest findings from joint research conducted this summer by Malwarebytes and 1Password, which we have published today in the report “Forever connected: the realities of parenting and growing up online.” The data from our two, parallel surveys—one for Generation Z respondents aged 13 to 25 and one for parents whose children are between 8 to 17 years old—revealed the need for parents to take an active, prolonged role in preparing their children for staying safe and private online.

But the task of raising kids online is, understandably, quite nuanced.

As revealed in our research, parents and children often have different ideas about what will keep them safe online. Complicating the matter is that many parents are passing down outdated or ineffective habits to their children, potentially creating a division between how well parents believe they’re supporting their kids and how well kids think they’re being supported.

Separate from cybersecurity, parents and teens also differ on how to stay private online, and even on what online privacy means and for whom. For example, while a majority of Generation Z members want their parents to ask for consent before sharing photos of themselves online, far fewer parents believe their children are owed that consideration. Compounding this is the fact that more than a third of parents said they felt it was okay to start sharing online images of their kids as soon as they were born.

These trends aren't born of malicious intent, though. Mark Beare, general manager of consumer business for Malwarebytes, noted how parents will share images and videos of their children because they are proud of their kids and want to share these moments with others. Further, many parents—and non-parents—are sharing with an earlier understanding of the Internet.

"As more and more parents have also moved to social media they have begun sharing about their children in a much more public way. They are sharing without understanding the future ramifications on how this affects the digital profile of their kids as they come of age and manage their own digital profiles," Beare said.

"As a society we are all learning that the initial ‘free and open sharing’ that people did when social media was new has ramifications on our privacy and for the privacy of friends and loved ones."

In separately reviewing our report, Jason Kelley, associate director of digital strategy and activism at Electronic Frontier Foundation, stressed how important it is for families to learn about the Internet together.

“Whatever age you are, when you go online, you deserve security and privacy,” Kelley said. “It is essential that parents and young people learn how to protect those rights, because at least for now, many online platforms, bad actors, and in many ways the entire ecosystem of the Internet are working against them.”

In our full report, we explore several key themes and statistics:

Lacking parental support. Three quarters (74%) of parents are confident they are keeping their kids safe online, but only 51% of Gen Z respondents agree with the statement: “I feel supported online by my parents.”

Absent antivirus: Though 76% of parents protect their children’s online experiences by installing antivirus software on devices at home, just 28% of Gen Z said their parents required them to use that software on their own devices.

Online since birth. Four out of five (79%) parents post images, videos, or personal information about their kids online. And 39% say it’s fine to start posting images of their children as soon as they’re born.

Clashing expectations for privacy. While 73% of Gen Z wish their parents would ask permission before posting pictures about them online at least some of the time, only 34% of parents ask permission and 39% feel they don’t need permission to post content related to their kids.

Conflicting sense of reality. 89% of parents say they monitor their child’s activity, yet 66% of teenagers say their parents have no involvement in their online accounts.

Stealthy workarounds. 72% of Gen Z admit to having tactics to avoid their parents’ monitoring. Some kids even go above and beyond to avoid detection, with 13% using a virtual private network, 9% having a secret device parents don’t know about, and 6% performing factory resets on their devices.