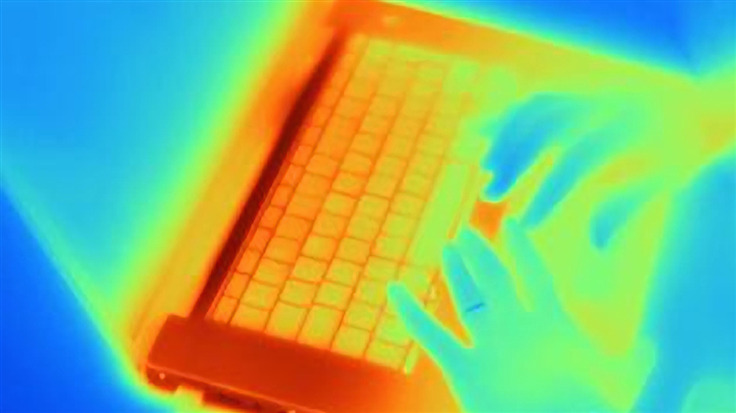 ThermoSecure, a system developed by researchers at the University of Glasgow demonstrated how thermal cameras and AI can steal credentials from, literally, under our noses.

Thermal imaging cameras detect heat energy, a helpful tool for engineers when hunting for thermal insulation gaps in buildings. But did you know that such devices can now aid in password theft?

Because these devices are sold a lot cheaper than they used to, pretty much anyone can get their hands on them. And anyone with a thermal imaging device could be a potential password thief.

Researchers from the University of Glasgow’s School of Computing Sciences have developed a system, ThermoSecure, in order to demonstrate how these thermal imaging cameras can be used for "thermal attacks."

In their paper, ThermoSecure: Investigating the effectiveness of AI-driven thermal attacks on commonly used computer keyboards, Dr. Mohamed Khamis, who led the development of ThermoSecure, Dr. John Williamson, and Norah Alotaibi, the authoring team, said: "Thermal cameras, unlike regular cameras, can reveal information without requiring the attacker to interact with the targeted victim, be present during the authentication attempt, or plant any tool that can be linked to the attacker which could potentially exposing [sic] them. Such information includes heat residues left by the user during authentication, which can be retrieved using thermal cameras."

"Having acquired a thermal image of a keyboard or touchscreen after authentication, the attacker can then analyze the heat map and exploit it to uncover the entire password or pattern."

Bright areas in a thermal image are heat imprints, indicating these were recently touched. While these are enough for the AI to determine someone’s password, two factors affect its accuracy level: (1) the password length and (2) heat trace age, or the time after authentication.

As for heat trace age, on average, ThermoSecure successfully revealed passwords with 86 percent, 76 percent, and 62 percent accuracy when the image was taken 20 seconds, 30 seconds, and 60 seconds after authentication, respectively. The longer the heat trace age, the less accurate the AI was in guessing passwords.

“It's important that computer security research keeps pace with these developments to find new ways to mitigate risk, and we will continue to develop our technology to try to stay one step ahead of attackers," said Dr. Khamis in an interview with ZDNet.

He also advised how you can protect yourself from thermal attacks: Use strong passwords and, if possible, use biometric verification for added protection.

"Users can help make their devices and keyboards more secure by adopting alternative authentication methods, like fingerprint or facial recognition, which mitigate many of the risks of thermal attack."