Secure Boot is an option in UEFI that allows you to make sure that your PC boots using only software that is trusted by the PC manufacturer.

Secure Boot is an option in UEFI that allows you to make sure that your PC boots using only software that is trusted by the PC manufacturer.

Allow me to explain. A while back we wrote about the limitations of the MBR. A very limited number of primary partitions and most of all the maximum partition-size of 2 TB (for Windows XP and Server 2003 that is also the maximum disk-size).

The development of a next generation method of storing the partitioning information was done mostly (for Windows operating systems) in association with UEFI as a replacement for the BIOS. UEFI supports the GPT standard, which stands for GUID Partitioning Table and is called that because it assigns a GUID (Globally Unique Identifier) to each partition.

For now, this system is so flexible that the limitations in disk size and number of partitions now lie with the Operating System. For example, Windows allows up to 128 partitions on a GPT driver without having to use extended partitions. As a bonus, GPT uses a redundancy check so it can notice a problem and attempt to recover any lost data.

The aforementioned redundancy check and Secure boot are the most prominent security features that came with the GPT/UEFI setup. It should put an end to the revival of boot-kits that became prevalent in recent years.

A boot-kit is malware that loads before the Operating System (OS) so that it can hide itself from the OS and it can survive even if the Operating System is replaced. This does not mean that UEFI can’t be compromised. But it should make it a lot harder to infect, and easier to find and clean.

The Secure Boot option has been regarded by some with distrust because it could be used to give Windows a monopoly on certain systems. If there is no way to disable Secure Boot,  Microsoft could enforce that the systems only runs Windows 8 (or later).

Finally, it should be noted that programmatic disabling of Secure Boot either during Boot Services or after exiting EFI Boot Services MUST NOT be possible. Otherwise, malware could still change the settings, and this would make the whole effort pointless.

For example, if you enable Secure Boot on a computer that has Windows 7 as an OS, you will get an error during boot. The error code is usually 0xc0000428 and is sometimes accompanied by a message about an unsigned EFI file in the system32 folder of the Windows 7 partition.

Secure Boot can also stop the system from booting if unauthorized firmware or changed Operating System loaders are found. 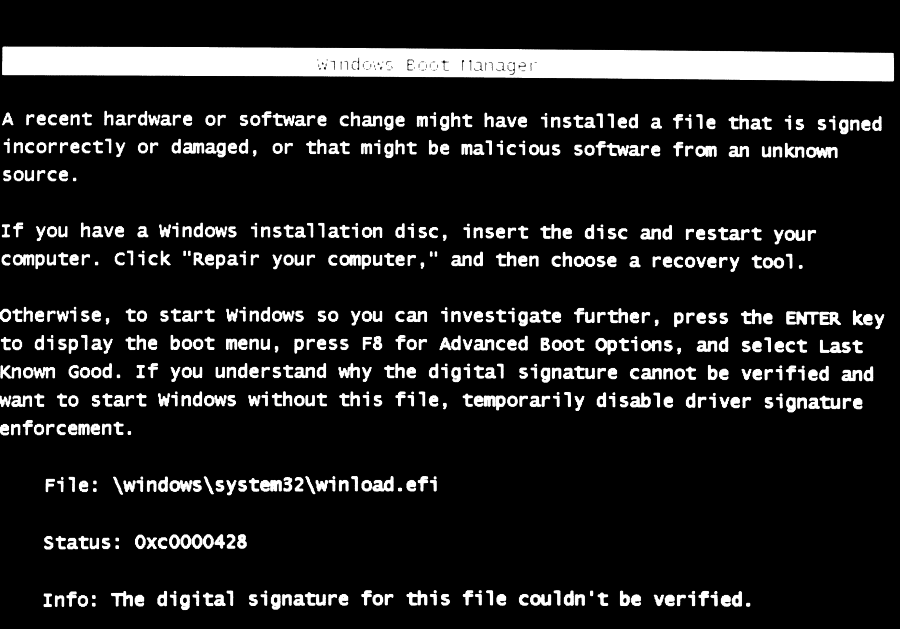 Conclusion: Secure Boot is part of the options that UEFI has to offer for the newest Windows versions. It does offer security, but some who prefer other Operating Systems regard this security feature as somewhat controversial.

A simple note on how to repair bootstructures

A Tale Of One Software Bypass Of Windows 8 Secure Boot