What exactly is iPhone jailbreaking - why one would want to do it and why you shouldn't be tempted. Security vulnerability and exposure to cyberthreats are among key reasons. Learn to protect your phone below. 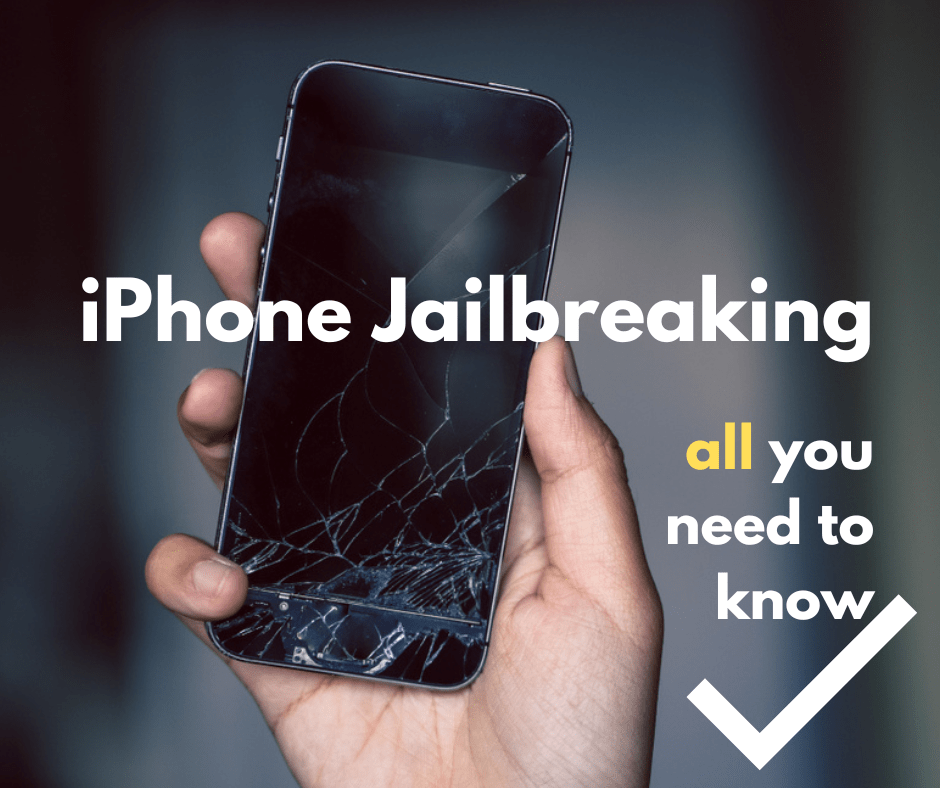 What is iPhone jailbreaking

But the risks of jailbreaking iPhone devices are less worthwhile nowadays. There was a time when iPhones were exclusive to one carrier, but Apple’s stance has changed. Today, the American multinational technology giant offers iPhones through multiple local and international carriers. It has also made it easier to unlock your iPhone.

Moreover, the modern version of iOS is significantly more customizable than earlier iterations.

The biggest benefit of jailbreaking iPhone devices nowadays is accessing open-course packages and downloading unauthorized apps. While the App Store usually offers security and stability, its strict screening process can delay some apps or prevent them from appearing on the App Store altogether.

Read this detailed guide for more information on the following:

iOS devices are significantly more restricted than Android devices for a few reasons. By locking down iPhones, Apple can control user safety, enforce legal restrictions, and maintain a more positive and unified user experience across its ecosystem. Of course, it can also profit more easily from software that’s forced to go through the App Store.

The definition of jailbreak doesn’t change when talking about iPhones. Jailbreaking an iPhone means gaining unauthorized root access to the operating system by modifying the iOS. Jailbreaking the iPhone doesn’t change its hardware or modify its features. But it does allow users to:

Gaining these benefits of jailbreaking iPhone devices requires some technical knowledge. You must also feel comfortable using iOS jailbreaking tools from the jailbreak community. However, in some countries, you can simply take your iPhone to a mobile store and purchase a jailbreaking service.

Jailbreaking an iPhone also means exposure to certain risks, such as malware, instability, loss of warranty, and more upkeep. If you can do something, it doesn't mean you should.

Types of jailbreaking: How to jailbreak an iPhone

We can’t teach you how to jailbreak iOS devices here. But you can find iPhone jailbreaking guides and software on websites and message boards that promote device freedom. Always apply caution when browsing iPhone hacking communities, though. For instance, please be wary of fake jailbreak sites and mobile app unlockers.

The limitation is inconvenient because a jailbroken iPhone can have a shorter battery life and may be more prone to freezes and crashes. Bringing a tethered jailbroken iPhone home every time for a reboot after a glitch can be bothersome.

How to tell if an iPhone is jailbroken

Spotting the signs of a jailbroken iPhone can be useful. For instance, if you want to avoid buying such a device on an online marketplace while shopping for pre-owned iPhones, you should learn to tell if a device is jailbroken:

The terms rooting and jailbreaking are used interchangeably nowadays for circumventing manufacturer restrictions and gaining root access to a device. Rooting is typically used for Android devices while jailbreaking applies to devices that use iOS.

While both rooting and jailbreaking achieve similar goals, there are some subtle differences. The most standout difference in the jailbreaking vs rooting comparison is that rooting gives Android users much deeper access due to the open-source nature of Google’s operating system.

Jailbreaking phones has been legal in the United States since 2010, while jailbreaking tablets and smartwatches has been legal since 2015. These devices are part of the Digital Millennium Copyright Act (DMCA) exemption list in the United States. The proposed exemption on jailbreaking was due to the efforts of the Electronic Frontier Foundation (EFF). The EFF argued that modifying a device to run independent software is important for many programmers, enthusiasts, and users.

Jailbreaking devices is also legal in many European countries as well as India and New Zealand. But digital rights laws are always evolving, so it’s best to check your local regulations. For instance, in 2018, smart light bulbs were added to the DMCA exemption list.

Although jailbreaking is illegal, copyright infringement is not legal in many countries. If you’re using a jailbroken device to break copyright, you’re breaking the law. For instance, using a jailbroken iPhone to copy software programs illegally is a crime in the United States and many other countries.

And while jailbreaking an iPhone doesn’t break national laws in the United States, it does violate the iOS end-user software license agreement. In other words, you may void your iPhone warranty after using any unauthorized software, including jailbreaking tools.

Is jailbreaking an iPhone safe?

Jailbreaking an iPhone is not safe because of:

Does jailbreaking an iPhone unlock the carrier?

Jailbreaking your iPhone allows you to download apps that remove carrier restrictions. However, as stated earlier, you can officially unlock your iPhone for use with a different carrier. Apple suggests you contact your iPhone carrier and request an unlock.

You can check if your carrier has unlocked your device by tapping Settings > General > About. Next to Carrier Lock, you should see No SIM restrictions.

Can jailbreaking break your iPhone?

While most jailbreaking tools will not directly break your iPhone, software and hardware issues due to jailbreaking may result in breakage. For instance, users on the Internet report overheating and battery problems with jailbroken iPhones. Such problems can reduce the lifespan of an iPhone.

Some iPhone users also report bricking during or after a jailbreak. An unresponsive iPhone due to a jailbreak can be fixed, but the process may require time and some technical skills.

The risks of jailbreaking iPhone

More risks for malware and viruses

Can iPhones get viruses? While unlikely, iPhones can get viruses. iPhones are more susceptible to other kinds of malicious software though, such as adware, Trojans, spyware, and stalkerware. These unfriendly programs can lead to worrying malware symptoms. Keeping most malicious threats at bay are iPhone security measures from Apple.

Jailbroken iPhones don’t get automatic updates from Apple. Instead, they must wait for a jailbreak update for the latest iOS release. Downloading and installing updates on a jailbroken device can be tedious, time-consuming, and also pose security risks.

Remember, Apple stays on top of exploits and other security flaws in its products by regularly patching its software. For instance, after Pegasus was uncovered by researchers, Apple patched the zero-day iOS vulnerability exploited by the powerful spyware. Users of jailbroken iPhones do not have immediate access to such critical updates.

It’s not unusual for jailbroken iPhones to have shorter battery power. The loss of battery life can be problematic as some jailbroken devices can’t be restarted independently.

Jailbroken iPhones can suffer from data loss or corruption. In other words, you are at greater risk of permanently losing your precious pictures, videos, and text messages after jailbreaking your iPhone.

Some users on hacking websites and forums report that their iPhones are completely unresponsive to input after a jailbreak. A bricked iPhone will not make calls, reboot, or update. While some special tools and techniques can help repair an unresponsive iPhone, it is a very expensive electronic brick until then.

A jailbroken iPhone is more likely to crash because it uses apps and features that aren’t thoroughly tested. Some jailbroken iPhones also suffer from connection issues, resulting in dropped calls or poor sound quality.

Security flaws due to jailbreaking can expose user data. A hacker may steal sensitive data during a data breach to execute identity theft or financial crimes.

The risks of jailbreaking an iPhone would be easier to accept if the process didn’t void the warranty. If your jailbroken iPhone is overheating, crashing, or malfunctioning, Apple is unlikely to repair or replace it.

Can you reverse jailbreak an iPhone?

It’s certainly possible to reverse jailbreak an iPhone. However, keep in mind, that initiating a jailbreak in the first place will delete all your data. Depending on the type of jailbreak, it might be more difficult to reverse it. Restarting your semi-tethered or semi-untethered jailbroken iPhone should return it to normal. But the best way to remove all traces of a jailbreak is to restore your iPhone to factory settings through a computer running iTunes:

Protect your phone with iOS security

Although regular iPhones are significantly more secure than the jailbroken variety, they’re not invulnerable to cybersecurity attacks. Malware like spyware and ransomware can hurt your privacy and financial security, while scams, malicious links, and fraudulent websites can steal your sensitive data.

Whether you have a regular or jailbroken iPhone, we recommend that you shield it with a proactive antivirus for iPhone like Malwarebytes for iOS. Our all-in-one security system will shield your iPhone from malware, online threats, spam calls and texts, and clever scams. Install it today to give your iPhone the extra layer of security it needs in a digital world with increasingly complex threats.